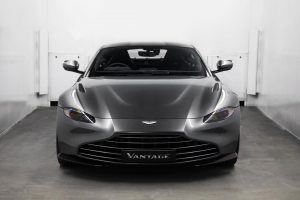 Manufacturer follows in the wake of aftermarket with new grille replacement

Aston Martin Works has provided Vantage owners with an in-house solution for the car’s divisive grille, significantly altering its appearance with a new intake and bumper. It’s not a dramatic as the one offered by aftermarket firm Revenant – which completely alters the Vantage with a much smaller design - but the Works’ grille definitely draws a closer link to the Vantage’s predecessor, something the market has been pining for since the Marek Reichman-designed two-door arrived in 2018.

Heading up the conversion at AM’s Works division, Oliver Ayris told PH that the lead time for the job was three to four weeks and the cost – including VAT, painting and fitment – was £2,999. There are four variants of the grille that customers can choose between, with each requiring the front bumper to be replaced as well. This being an in-house job, the factory warranty is unaffected, an obvious USP for anyone with their three-year guarantee intact to go with the Works grille over those offered by the aftermarket.

As you’d expect, there's said to be no impact on the cooling and aero efficiency of the twin-turbo V8-powered Vantage, and both coupe and roadster bodystyles are compatible. The part can be ordered and fitted to both brand new and used cars, meaning some Vantages may be delivered with the ‘conversion’ on from the factory. It could almost be thought of as an optional extra, then, although as a product of the Works division – the arm that produces special builds like the £3.3 million DB5 Goldfinger – it’s technically a modification carried out by an in-house AM department.

There's also the Aston Martin grille alternative, which uses a vane design that’s inspired by the DB10 and was launched only this year. But it makes for a much less noticeable change to the car’s look. Plus, there’s something very cool about having your car sent to the Works department, isn’t there? For some it might almost constitute a no-brainer. Unless the 2018 design has grown on you? Either way, Aston finally seems to have all bases covered…