Ather Energy opens its fast-charging connector for other OEMs 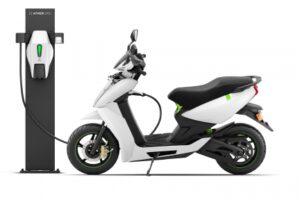 Ather Energy has announced that it will offer its proprietary charging connector to other OEMs. This will pave the way for an interoperable 2-wheeler fast charging platform and help lower infrastructure investments.

According to the company, having a common connector that can be used across different products will help maximize the usage and efficiency of the charging infrastructure. It would also give customers access to Ather’s 200+ fast chargers, thus reducing range anxiety.

Ather Grid has been providing normal-speed charging options for electric 2-wheelers and 4-wheelers free of cost. Opening up the connector technology would allow all EV owners to use any of its fast-charging stations across the country.

Ather Energy believes that there is a need for a new connector standard for fast charging. CHADEMO and CCS standards for electric 4-wheelers are not feasible for 2-wheelers. Therefore, the company developed a connector that integrates both AC and DC charging capabilities. It is suitable for 2 and 3-wheelers and has the ability of CAN 2.0 communication with control and proximity pilot.

Tesla, which is also planning to enter the Indian EV space, uses a proprietary connector. Earlier this year, the company announced that it would open its fast-charging network for other EV users. However, non-Tesla vehicles would require an adapter to connect to the ‘Supercharger’. The company currently has the world’s largest fast-charging network with over 25,000 Superchargers.