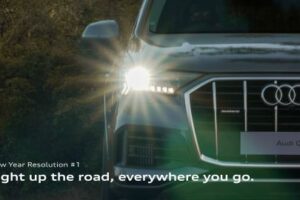 Audi India has released a teaser showing the upcoming Q7 facelift. Production of the Q7 has begun and is expected to be launched in January 2022.

The new Audi Q7 is likely to be offered with a 3.0-litre petrol mild-hybrid engine producing 335 BHP and 500 Nm. It will be paired with an 8-speed automatic transmission and the Quattro all-wheel-drive system.