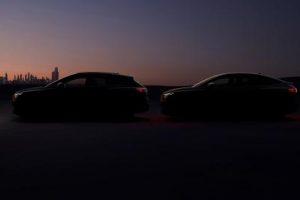 Audi has confirmed that it will globally unveil its latest Q4 e-tron and Q4 e-tron Sportback SUVs on April 14, 2021.

Audi has announced that its latest pure-electric offerings, the Q4 e-tron and Q4 e-tron Sportback will be globally unveiled on April 14, 2021.

Production of the two electric SUVs has begun and their European launch is expected to happen in the coming months. The Audi Q4 e-tron and Q4 e-tron Sportback SUVs are said to be based on Volkswagen’s modular electric drive (MEB) platform.

While the exterior design of the final production-spec SUV is yet to be revealed, Audi unveiled the interiors of the Q4 e-tron SUV last month.

The electric SUV is expected to come with a host of features including Audi’s 10.25-inch virtual cockpit, 11.6-inch touchscreen infotainment system with voice control, heads-up display and rear seats that are positioned 70mm higher than the front ones.

Audi is yet to reveal the powertrain options and technical details of the production-spec Q4 e-tron SUV.