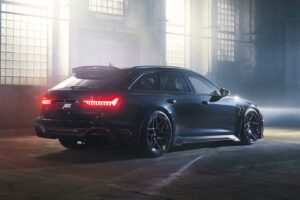 It was 1896 that Abt was founded, and 1897 when the first complaint was raised about too much coverage of its wares in the press. (Only one of those statements is true.) To mark 125 years of fettling and fine-tuning VWs and Audis, Abt is paying homage to its founder with an anniversary special based on the RS6.

The Audi RS6 Johann Abt Signature Edition is nothing less than “the most exclusive masterpiece” it has ever made, limited to 64 units (one for each year of Herr Abt’s life) and set to be hand-built over the next year or so. We’re not quite talking Morgan levels of hand-built here, but there’s clearly a lot going into a Signature Edition RS6 – just six will be made per month.

Obviously it’s got more power. Loads more, in fact, the 4.0-litre, mild hybrid, twin-turbo V8 tickled to 800hp from the standard 600hp with new turbos, larger intercoolers and some ECU work. An extra oil cooler has been fitted to keep a lid on temperatures. The results in terms of performance from “an engine that unleashes the brute force of a forging hammer” are predictably barmy. This two-tonne Audi will reach 62mph in 2.9 seconds, 124mph in 9.8 and 186mph in less than half a minute – 28.3 seconds, to be precise. Top speed is 205mph.

But Abt launching a new Audi with more power is like Nando’s introducing more chicken options – we’ve seen a lot of them now. To do justice to such a momentous occasion, the Johann Abt Signature Edition also has bespoke forged wheels – saving 3.5kg per corner – a new aero package increasing downforce by 150kg, height adjustable suspension and new anti-roll bars for “significantly reduced roll and lean tendency.” Which, given the standard car’s admirable resistance to much in the way of either sounds like quite the proposition. Particularly with 800hp.

Making its debut on the Johann Abt RS6 is the Abt App; in conjunction with the new ECU, it offers three drive modes – Eco, Power and Race – as well as live performance data.

And, finally, it wouldn’t be an Abt anniversary special without some elaborate cosmetic work. For this particular RS6, each will feature an aluminium time capsule with a fragment of Johann Abt’s original anvil that he worked with back at the end of the 19th century – yes, really.

“It is an irreplaceable piece of history, that has now earned a worthy place for eternity”, said Hans-Jurgen Abt. That quite incredible token is accompanied by a xx/64 badges, hand-sewn leather seats, Signature Carbon Red accents and ‘Since 1896’ embossed door sills. Those who love Abt – or merely mad RS6s – will surely find a lot to like here.

“The successor to our sold-out ABT RS6 R 1/125 is defined not only by the connection to our history and the myriad attractive details. Its performance… is revolutionary”, added Abt of his firm’s latest creation. Quite what an 800hp RS6 that pays tribute to Abt’s founder will cost isn’t clear just yet, but this must be in contention for most expensive Abt yet. And that might well be enough for 64 very fortunate customers.