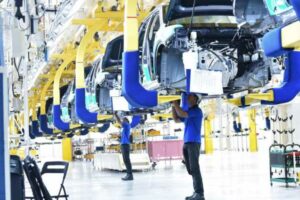 Automotive and component manufacturing will be permitted to resume production activity when the government eventually announces the transition from phase one to phase two of the national recovery plan (NRP), which is what the movement control order (MCO) will now be known as.

The activity is one of the 11 sectors that will be allowed to resume operation under a pre-approved list that was announced by the government yesterday. In his daily briefing, senior minister Datuk Seri Ismail Sabri Yaakob revealed the 11 sectors (six in manufacturing, five in commercial) that will join the essential sectors already operating currently.

Besides vehicle and component production, car wash centres will be allowed to reopen during phase two. It is one of the five business categories that will resume as part of the widening of commercial sector activities, the others being stationery and book shops, retail businesses involving computer and telecommunications devices, electrical appliances as well as barber shops/hairdressing salons, although the last will only be allowed to perform haircuts. All these will be allowed to operate from 8am to 8pm daily.

The resumption of all these looks to be a little while away. Previously, the full movement control order (FMCO), which began on June 1, was extended to June 28. No date for entry into phase two has been fixed, given that prime minister Tan Sri Muhyiddin Yassin reiterated yesterday that the transition to it will only occur when the country meets the exit parameters set under the NRP. Besides indicators being the demand on intensive care capacity and a 10% vaccination rate in the country, daily cases also have to drop below 4,000, which is not the case at present, with the country recording 5,586 new Covid-19 cases yesterday.

One thing that will not change in phase two will be inter-state and inter-district travel. Ismail Sabri said that all such travel will remain restricted, with the exception of teachers and students needing to travel for the purpose of attending examinations. Exceptions will also be given to long-distance spouses for emergency purposes, but subject to police approval.

As for taxis and ride-hailing services, the number of people in a car will continue to be limited to two (including the driver) in phase two, with the passenger having to sit in the rear, as revised during the FMCO. The capacity for hired cars will only be relaxed to three people when phase three is implemented – this also provides an indication that the capacity rules for passenger vehicles will be relaxed to three in a car in the third phase of the NRP.