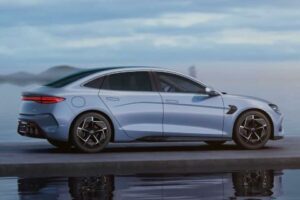 The BYD Seal rivals the Tesla Model 3 in the international market.

China-based BYD has showcased the Seal electric sedan at the on going Auto Expo 2023. The carmaker confirmed that the EV will be launched in the Indian market by the fourth quarter of this year.

The BYD Seal is a four-door EV featuring a coupe-like roofline and an overall futuristic design inspired by the 2021 Ocean X concept. The car has sleek headlamps, striking LED daytime running lights up front, a glass roof and flush-fitting door handles.

Inside, the BYD Seal comes with a dual-screen setup. A 10.25-inch screen displays the speed and other vital information in a digital format, while a 15.6-inch touchscreen takes centre stage. The car also gets features like a head-up display, wireless charging and a heated windscreen, among others.

The BYD Seal comes with two battery options – a 61.4 kWh unit offering 550 km of range and an 82.5 kWh pack with a claimed range of 700 km (CLTC-cycle). The base single-motor variant develops 201 BHP, while the one equipped with a larger battery packs 308 BHP.

The dual-motor Seal is available with the larger 82.5 kWh battery pack. It has a combined output of 523 BHP, which enables the car to sprint from 0-100 km/h in 3.8 seconds.