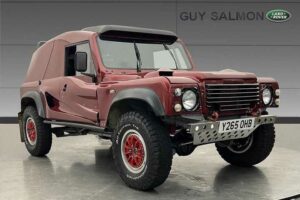 The new Bowler Defender goes into production soon; here's a rather special one they did earlier

Going fast in a car is fun. Going off road in a car is fun. Combine the two, throwing as much speed at the scenery is possible, and it’s hard to think of superior entertainment on four wheels. It’s why rallying remains such an absorbing watch, and why Bowler is held in such high esteem by many enthusiasts. Because arguably nothing looks better going really, really fast off-road than a Bowler-modified Land Rover.

Recent years have seen a boom in off-road sports cars of one description or another, from Morgan CX-T to the Ford Bronco Desert Racer and Prodrive BRX. It even looks like Porsche might resurrect a Safari-style 911, and Singer Vehicle Design should be on hand with its ACS even if not. Though a Defender or Range Rover Sport is a rather different proposition to a Porsche as standard, the desire to make an awesome rally-ready motorsport version isn’t so different.

The new, Land Rover SVO-supported Bowler CSP 575 ought to be in production soon enough; the Defender Challenge (using Bowler-prepped versions of the latest car) will resume in 2022 as well. Frankly, that was more than enough excuse to scour the classifieds for a Bowler; turns out this Wildcat is even more notable than most.

The Tomcat was Drew Bowler’s first model, launched in 1985; the Wildcat 200 arrived in 2000 as an evolution of the original idea, eventually introduced to the wider motoring world with that episode of Top Gear. Defender-derived with different tunes of Rover V8 available, the spaceframe-chassised, fibreglass-bodied Bowler was designed with the specific intention of competing in (and winning) rally raid events. While staying road legal. This Wildcat, build number four, did exactly that.

Registered in May 2001 to renowned off-road racer Hugh Haines, this 5.0-litre Wildcat can count the Baja de France 2006 and Baja Great Britain 2006 among its victories. It also tasted success on a Scottish Hill Rally, an event that featured in the original Defender Challenge calendar. And it’s been to the Goodwood Festival of Speed.

Furthermore, it’s recently had a bit of work having turned 20 years old; the big V8 was rebuilt earlier in 2021 by J.E. Developments, recording 339hp on a dyno at the end of it. All Bowlers are special, of course, but to have one for sale with actual rally-winning provenance is pretty remarkable.

And look at where it’s being offered – Land Rover South West London. Though not photographed with them, the Bowler is for sale alongside Velars, Discoverys and Evoques, which must be quite a sight in the shiny Sunbury showroom. The advert is written in a rushed and frantic fashion, like whoever was responsible for it just wanted to go back outside and drool some more, and it’s not hard to see why. With age may have come some familiarity, but the Bowler Wildcat certainly hasn’t lost any visual impact.

Listed with recently refreshed brakes and differential as well, the Wildcat is fit for whatever the next owner and 2022 has to throw at it. They’ve clearly been a memorable 11,000 miles so far, and those that follow promise more of the same. It’s for sale at £97,500; many a road-legal race car has cost an awful lot more than that, plenty without a solitary victory to their name. And we’ll bet none are quite such a giggle to drive.