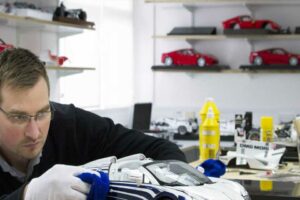 When you were a kid you glued together countless hundreds of Revell and Monogram car models. They could have been any kind of car, with your young and still-developing good taste. They weren’t bad, from a distance, once you soaked the decals off and stuck them on more or less straight. Sometimes you even got the paint on the fenders instead of the windshield. And when you were done with them—because it was a different age when you and I grew up—what did you do? That’s right, you took them into the vacant lot and blew them up with firecrackers!

Ah, those were the days. Nowadays you can’t even buy firecrackers without getting put on some watch list somewhere. 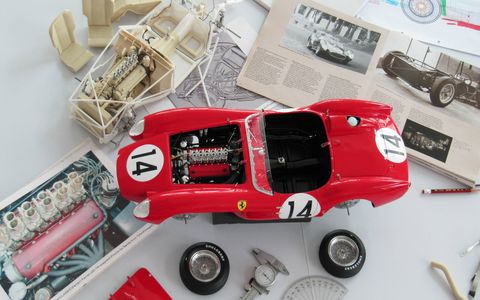 Yes, times have changed just as you have changed. While your budget for model cars back then was just what you earned on your paper route (where did paper routes go, anyway?), now you can afford better. So much better, when it comes to car models anyway, that while you would never consider blowing them up, you will certainly consider buying a nice glass case to put them in.

That’s because now there is a company called Amalgam that makes models of such exquisite detail that you really should build not just a glass case to display them in but a museum.

Amalgam produces models of the world’s greatest race cars and most sought-after road cars. Pictured here are a few of them—a Ferrari 250TR Scaglietti, the lime green 300SL Gullwing, and a Ferrari 250 GT California Spyder—but you can look at the Amalgam website and see a whole catalog of possibilities. Amalgam visited our offices and showed off intricately detailed 1:8 scale models of a yellow Ferrari 275 GTB4 and a deep red Pagani Huayra. Opening the little doors on the Huayra we could see the polished black carbon fiber and shiny gold aluminum fixtures. Pop the hood on the 275 GTB4 and you can see teeny little cloth insulation on the distributor wires. It’s both cute and cool at the same time. 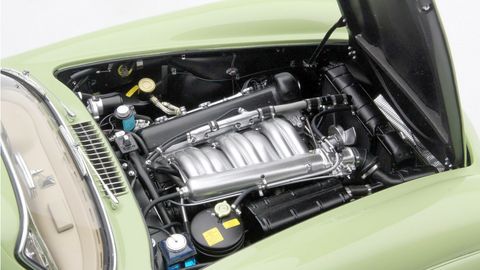 You don’t want just anyone’s generic 250 TR, so about 30 percent of Amalgam’s business is “tailor made.” To perfectly match the specific exterior color and interior finishes of a full-size, real car. Amalgam experts will even paint the race number on your door just like your real race car. They will delicately craft a microscopic pack of Camels to put on the dashboard. The dash fixtures will light up via fiber optic cable lighting. One-offs cost more, of course—maybe $75,000 or so? Prices vary. Some have gone as high as $100,000. 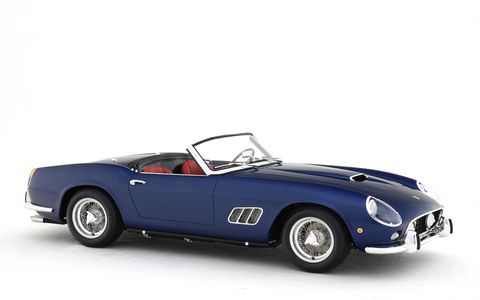 And 1:8 scale isn’t enough for some people, either. So Amalgam can also craft your replica car in 1:5 scale, which works out to about three feet long. They’ll also model your yacht and your jet. And since they started out building architectural models, they’ll do your Aspen ski hut, too.

So with Father’s Day fast approaching—like the day after tomorrow—send the folks in Cotham, Bristol, UK, an email and get that six-wheeled Tyrrell P34 or Aston Martin he’s always wanted.

Check out all the amazing miniatures at amalgamcollection.com, and let us know which is your favorite.