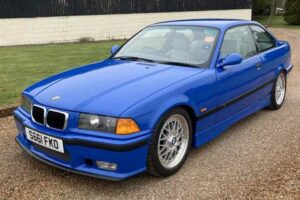 Missing from our recent list of cars that met their maker in 2022 was the manual BMW 3 Series. In the grand scheme of things, it’s not a big loss (which is why it wasn’t on the list), given how good auto gearboxes now are and how few people bought a 3 Series with gearsticks when they were available. But to die-hard enthusiasts like us, it felt like a much bigger deal; you only need look at the response to stories like this 340i Spotted, or note the premiums in the classifieds between classic BMWs with a clutch and without, to know how important a manual gearbox is to the dedicated few. Or the collectors: it seemed notable that BMW’s 3.0 CSL was very proudly manual only.

The idea here, then, was to fondly recall the long-throw, knuckly BMW manual as well as celebrate an anniversary, because 2023 marks 25 years the introduction of the all-conquering E46-era of 3 Series. Unfortunately, there are no suitable cars currently for sale from the first year of production, so maybe that one will have to wait until later in the year. Don’t be too sad, however; just look at what a manual BMW from 1998 we have instead.

With the two-door E46s following a little while after the saloon, those who wanted a 3 Series Coupe or Convertible in the late 1990s would have still been offered an E36. This is one of those late Coupes, a 328i M Sport in Santorini Blue with the all-important five-speed manual. You tend to see a few really lovely late E36s around now, either as low mileage, doted on originals, or lovingly restored as an increase in values has made the expenditure worthwhile. It’s nice to imagine E36s finding homes late in the 1990s as buyers just wanted a new 3 Series right away, didn’t want to wait, and cherished it for a long time afterwards. Or they saw an E46 saloon and perhaps preferred the current design, not keen on what a two-door might look like.

Presented with a 328i like this, that latter view is not as daft as it sounds. As the E30 was not so long ago, the E36 has assumed that position as the definitive modern classic 3 Series, instantly recognisable but so clean and so simple against later designs. It’ll be the E46s time in turn, surely, but for the moment the E36 looks in that real sweet spot between classic style and modern proportions.

Especially in Santorini Blue, on a set of refurbed split rims and with orange indicators still in place. This is a restored E36, one subjected to tens of thousands of pounds in remedial work to bring it back to its best; madness not so long ago when good ones were so readily available, but becoming more common. The 328 has been fitted with all new KW suspension, fresh brakes and a new rear subframe, as well as having every bit of body trim replaced, the front seats retrimmed and the headlining redone. The result is pretty glorious, with seemingly every surface – inside and out, top to bottom – as good as new. If anyone needed reminding of just how good an E36 can look, here’s the proof.

Furthermore, with almost 100,000 miles having been driven before the restoration (and just a thousand since), a new owner needn’t worry about using the 328i as intended. If any more encouragement were required, the advert suggests that £5,000 more has gone into the improvements than it’s now being sold for. While £15k is the top end for a non-M E36, it’s worth bearing in mind that they’re all kinda pricey now, with even automatic cabrios getting near £10,000 for the best ones. And that’s before getting started on M3s. For a taste of the BMW old school with the reassurance of some very recent work, it’s hard to think of much better.