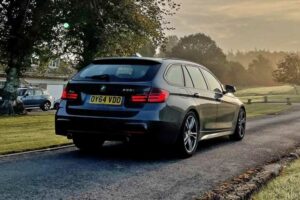 First job for the BMW? Holiday!

Not wishing to spoil the excitement of a new car, I didn’t let on about a key 335i detail in the first report. The tracking was out, annoyingly, from purchase. As soon as I was up to cruising speed away from the dealer, it was clear something wasn’t right, the angle of the steering wheel not tallying with that of the front tyres. Presumably the newly-refurbed-for-sale wheels didn’t quite go back on right; I couldn’t take the car back at the time, and my local BMW agent wasn’t willing to sort it without asking for an extortionate amount of money in return.

So the local Halfords Autocentre did the job, and for £69.99 I had a 3 Series tracking straight and true. It made a significant difference, in fact; more relaxing at speed, of course, but also steering with greater clarity as well. Obviously it’s not been made into a Lotus, though it’s nice to have an overly shiny, overly chubby steering wheel (it’s on the to-sort list!) behave and feel how it ought to. It never should have been an issue, but those are the risks you take with a second-hand purchase.

Plenty of miles have been added to the Touring already, partly thanks to new-car eagerness and partly because of a family holiday to Dorset. Despite the attendees consisting of just myself, a pregnant girlfriend and a cockapoo, it’s incredible how much stuff we required for a few days away. Quite what will happen when baby actually arrives I’m not so sure. Anyone who wishes to add to the roofbox recommendation list, feel free…

The 3 Series at least felt perfectly suited to the task at hand; big enough for all our junk yet compact enough to feel wieldy on the smaller roads. Which is more than can be said for some family cars down there catching the last of the sun. It’s still averaging more than 30mpg according to the trip computer despite those ballasted journeys (I’ll do a more accurate measurement soon) and still feels really quick as well: I love how closely stacked the intermediate gears are in these eight-speed BMWs, so it chomps through third, fourth and fifth, only dropping a few hundred revs each time and accelerating almost relentlessly. Even if the straight-six growl alongside sounds a little synthetic, it’s certainly nice to have. Gotta justify the premium somehow, right?

Hopefully you all do this when buying a car, too, but I’m now checking out every single F31 3 Series Touring I see. And given BMW sold 65,000 of them here, there are plenty to look at. I can’t stop. Does it have the xenons? Is that two exhausts for a 335d, or just a 320i? Where’s that roof box from? Why didn’t we get Estoril Blue? Do those M Performance bits look good? And so on. Alice is enthralled by the process, naturally. I’m becoming a bigger advocate of the car by the day. There hasn’t been one even close to the sleeper spec of VDO yet, smaller wheels on the four-cylinder models and the six-cylinder cars more potent than the old grey bus. That makes me very happy. Well it did, right up until I saw a green Alpina B3, and then I was sad I didn’t have that F31.

Although the job means I’m spoilt by driving a lot of new cars, I was convinced that nothing could match the satisfaction of driving something that I actually own. It had been a while, after all (too long, you might say), and I was absolutely right. I start it first thing with the door open because that straight-six sounds so good cold, I’ve fiddled with the instrument backlighting dozens of times, I think I know the iDrive buttons without looking, I know what revs it tends to change gear at and with each passing mile, it feel more and more like my BMW 335i. Which is fantastic. And helps justify paying what we did.

But it isn’t my perfect BMW 335i. And, to be frank, it won’t be for a while. Not because loads needs doing to it, but simply because I don’t have the money! Ahead of getting it fully CarPlay equipped, I need a phone mount (because even using BMW RTTI from just a few years ago simply isn’t as good as an app – and I don’t like it in the cupholder); the sole USB port barely charges, so perhaps a better one can go in the cigarette lighter; and the standard speakers really are woeful, so any suggestions there would be appreciated. Winter tyres may soon have to be on the shopping list, too.

But before that, I’d really like the wheel retrimmed; despite the BMW stereotype, both my hands grasp it all of the time (honest), and it doesn’t feel very nice. Having heard good things about Royal Steering Wheels and found they aren’t far way, I’ve really no excuse not to sort it. It feels like leather should stay given the standard spec, though I’m a sucker for suede as well. But I draw the line at 12 o’clock contrast stitching, promise. Expect an update soon!