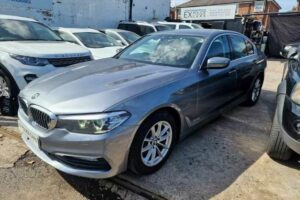 The most important thing about an undercover police car is, you would think, the ability to go undetected. Which is why this week’s Pill, a spectacularly leggy ex-plod BMW 530d xDrive, has been causing some chin scratching in the office. As what has to be pretty much the only unoptioned G30 generation 530d SE in the country it is surely going to stand out like a bratwurst in a martini anywhere it goes.

Of course, it could be that the forces of Laura Norder reckon that crims are less car literate than your typical PHer, which is likely. Or alternatively that whichever police service that was running this 5-Series wanted it to be recognised by bad ‘uns as it patrolled the grim streets, like Sergeant Chisholm’s bright red Ford Cortina in Minder or the doom blue Sierra that was the ‘area car’ in The Bill, both of which would inevitably get miscreants running as soon as they lurched into view. (Anybody under 45 – ask a parent.)

Or maybe this is just how all police-spec 530ds are delivered, regardless of whether they are going to end up wearing Battenberg, with dinky 17-inch alloys rattling about in the arches and the cloth seats that have surely never been fitted to any civilian G30 sold in the UK.

The police certainly know how to go into the deepest of deep cover when the want to. The SP&L forum sometimes discusses the innovative undercover cars sent out to nab the unwary. And I used to work with a nice chap whose brother was a member of a secret squirrel surveillance unit run by the Metropolitan police and charged with keeping tabs on suspects in the sort of areas where uniformed officers would normally travel in threes, or more often not at all. To do this they used such unspottable oddballs as banged-up Zafiras and ancient Mitsubishi Shoguns, these carefully chosen so that – as my colleague put it – ne’er do wells wouldn’t be able to smell the bacon. Against that standard of subterfuge, this 530d is practically a hog roast.

This is the first former police car to make Brave Pill, but it definitely qualifies on both risk and reward. The former comes from a life that has doubtless involved plenty of thrashing by lead-footed flat-foots, and likely a fair number of kerbs and speedbumps taken at speed. The latter is down to a £13,745 price tag which makes it the cheapest xDrive G30 530d in the classifieds by more than four grand, with the runner-up also being another former police car albeit one finished in a more traditional shade of fridge white.

But while most former police cars show plenty of evidence of a life lived hard, frequently sporting holes in bodywork where lights and aerials have been removed and the sort of icky stainage that an ultraviolet light would turn into a psychedelic disco, this one looks impressively fresh. The dealer selling it, a specialist based near Manchester, promises it is ex-CID and, to judge from the photographic evidence, the boys in mufti took pretty good care of it.

But they also seem to have used it for what seems to have been some long-distance detective work. Despite having covered slightly more than a light second this 530d isn’t actually our leggiest Pill ever. Nor, strangely, even our leggiest 5-Series. That’s because the only car to have featured here which had travelled further was an E39 M5 that we featured nearly three years ago, one that had managed to cover over 200,000 miles in almost two decades.

This G30 hasn’t quite reached that total, or at least hadn’t when it passed its first and only MOT in June having covered 198,369 miles. (We’ve had a peek behind the hidden registration plates.) As it was first registered in March 2018 that means it has averaged nearly 50,000 miles a year, which is going some by any standard. But as the record only shows one test the chronology is confusing – it went four years before its first MOT. So either a fleet manager was a bit lax about such things, unlikely given the car’s ownership, or, alternatively, this 530d has been off the road for a while.

Which is a strong possibility given the chequered history that N57-powered BMWs have had in police service. There have been many well-documented car fires in models equipped with the engine, and earlier this year several forces decided to restrict N57-engined vehicles to light duties to avoid the risk of thermal incidents. That led to a large number of six-cylinder BMW police vehicles being de-fleeted, some with very low miles, and some others with their engines drilled to prevent them from future use. Our Pill clearly isn’t a lightly used car being disposed of early, but it could still have fallen under the same edict.

BMW has been reticent about confirming what went wrong, although it did issue a statement admitting that a “unique usage profile puts extra strain on some components” and reassuring punters that regular use didn’t risk such a thing. Interestingly BMW of North America issued a recall of N57-powered cars at about the same time on the grounds that a leaking exhaust gas recirculation cooler could allow coolant to mix with hot soot deposits and burst into flames.

So there should be no disagreement in the forums that, despite its newness, there isn’t a Pill-appropriate level of risk here. More confirmation of a life lived hard comes in the advert’s admission our Pill had a new timing chain and crank bearings fitted at a BMW main dealer at 135,000 miles – which is hardly a minor procedure on one of these. On the plus side, that is also evidence of Jake Blues’ assertion that police cars get what they want, when they need it: it can’t have been a cheap fix.

While most former police cars look very obviously like former police cars, this one is more undercover. Granted, scrotes will probably still peg it on sight, but neighbours are more likely to think the boggo basic spec is down to the next owner being a total tightwad.