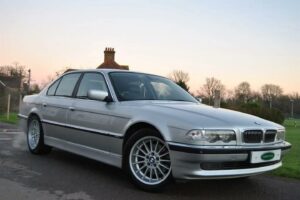 Of course, the default luxury limo is the Mercedes-Benz S-Class, which has tended to grab all the headlines with its onslaught of tech that wows onlookers and buyers alike. The W140 really was a tour de force in that department; although I have to laugh about those ‘ariels’ that sprouted from the top of its rear wings to let you spot the backend while parking. This seemed like a genuinely amazing new gadget in 1991, right up until the parking sensor arrived and immediately made it look a bit silly.

Yet as technically brilliant as the W140 was, it was a bit of a slab-sided old thing. Meanwhile, the E38 BMW 7 Series that arrived in 1994 was a thing of beauty. It didn’t really matter about the feature count because those Boyke Boyer lines were so elegant and sleek that it made anyone riding inside look more discerning and distinguished and as elegant as the car itself.

At the same time there was novel technology, too, because it was the first car in Europe to offer GPS-guided navigation (produced in conjunction with Phillips), curtain airbags and the first BMW with a factory-fitted in-built television. Although having owned an E39 BMW M5 with this feature, I can tell you that it was very hit and miss when you wanted to tune into East Enders.

Other features that were available with the E38 included laminated side windows to stop you getting carjacked, xenon headlights to help you to see who was trying to carjack you, and electronic traction control to stop you crashing while getting away for the carjackers. Carjacking was all the rage back then as I recall. But it was also available with a manual gearbox, which was unusual for a big car like the E38. Mercedes didn’t offer that in its S-Class, and while Jaguar still offered a manual in the X300 XJ at the time, it was a bit agricultural whereas the E38’s five-speed ‘box was slick. As was its excellent five-speed ZF auto, which had a sequential override to give you the best of both worlds.

This was pertinent because the E38 was a very capable car dynamically. I was working for a Jaguar dealer during the period that the E38 was on sale. When the X308 was launched, Jaguar gave us the opportunity to drive its new top-end model back-to-back with its rivals. This was one of the earliest times I recall thinking that I’d like to write about cars rather than be tied to one brand’s models. You see, when I drove the Daimler Super V8 I liked it very much. Then I drove the S-Class, which by then was the W220, and I thought it technically better in almost every way. And then I tried a BMW 750i and fell for the way it drove hook, line and sinker. The engine was fantastic, but so was the way such a big car could be made to feel so agile.

This car isn’t 007’s V12, sadly, but as second-bests go, its creamy 4.4-litre V8 is top-notch and provides easy performance with its tally of 282hp and 325lb ft of punch. In fact, none of the engines that were available were bad, because what the entry-level 728i lacked in performance it made up for by being a baby-bottom-smooth six. This 740i comes with a light-use 69,000 miles and what looks to be a comprehensive history file and an equally comprehensive specification. And with its Nokia phone preparation, it’ll encourage you to go digging in that drawer of enchantment we all have, to see if it contains the joy of an old 6310. If it doesn’t, then never mind. You can content yourself with the joy of a classic Seven that looks as beguiling today as it did back in the day.