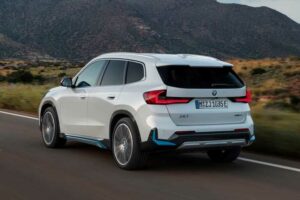 An all-wheel-drive electric BMW that isn't ghastly to look at – whatever next!

There’s been an X1 in the BMW range since 2009 now, so it’s probably fair to say the gamble on a small BMW SUV has paid off. Not least with more than 200,000 a year now being sold globally. Now the third, U11 generation car (yes, even the F and G numbers have run out) will aim to push that number higher with an all-electric iX1 included for the very first time. What, you expected an M car?

Said to be BMW’s first (and surely not last) all-wheel drive electric compact car, the iX1 has a motor on each axle, though the kWh of the battery “positioned flat within the vehicles underbody” hasn’t been confirmed. Regardless, BMW is promising 313hp and 365lb for the solitary xDrive30 model, which is sufficient for 0-62mph in 5.7 seconds.

Using BMW’s newest and spangliest fifth-gen eDrive electric tech (sharing software with the i7, no less), the iX1 should deliver a WLTP range between 257 and 272 miles. Which is a lot of trips to John Lewis, though predictably short of the 331 miles of WLTP range that Tesla quotes for its AWD version of the Model Y.

Like the larger iX3, the iX1 is recognisable as the base car first with a few EV cues rather than something wild and wacky in the earlier manner of the i3. Which BMW will tell you means “a more prominent design, superior spaciousness, advanced digitalisation” from an X1, albeit with the i trademark blue highlights and badges plus its own wheel design. Presumably BMW has witnessed the success of the entirely regular looking Mercedes EQA and opted to play it safe.

Other notable bits for the rest of the new X1 range – which will include plug-in hybrids, petrols and diesels alongside the electric one – are as is becoming familiar for new BMWs. Buyers will get BMW Operating System 8 with the Curved Display, plus the options of BMW Individual paint for the first time, an xLine model with “stylistic underride protection” and even a tow bar. Which probably won’t be as popular an extra as the “far wider selection of automated driving and parking systems”, but it’s nice to know it’s there.

All of the X1s, with batteries or without, will roll down the same Regensburg line, which seems an impressive logistical feat (and not dissimilar to what’s done with Minis in Oxford.) The first ones will be built in October, by which time we’ll know more about the iX1. You don’t need us to tell you it’ll probably be very popular…