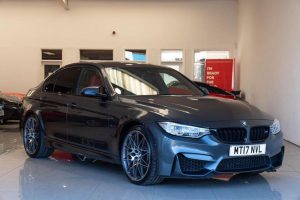 New M3 Comp look a bit pricey? This one's less than a price of a Golf R

After the new BMW M3 and M4's most discussed feature – nobody needs reminding of that by now – the biggest talking point has to be the price. Because while this is the most powerful and apparently the most capable M3 yet, it's also the most expensive, kicking off at £75k. With a fuller options list than ever, too, it is possible to specify a £100,000 BMW M4 Competition. Which, even for the well-heeled, is a significant amount of cash.

Clearly, then, the notion of a pricey M3 is not new. Handily for this story, though, neither is idea that the M3 sheds a chunk of that value with use. The days of great M3s plummeting to £5k look unlikely to return, though it is going to be possible to pick up relative bargains a few years after first registration – as this car ably proves.

It's an F80 M3, but most notably an M3 Competition, the option pack that proved so popular from its 2016 launch that BMW UK isn't offering non-Comp versions of the new car here at all. All things considered it was a fairly a modest update – 19 more horsepower, some tweaks to the suspension and new wheels – but the Competition corrected a few of the standard car's wayward tendencies while retaining its likeable angry streak. The CS was better still when it came along, but not by a margin commensurate with the premium asked. If you want an F80 M3, you want a Competition Package.

That's why it was our choice as the super saloon to buy at £35k, even though the majority were a bit more than that towards the end of 2020. This DCT example just sneaks in under budget, though, at £34,911, thanks to a chunky 63k recorded mileage – it's rare to see Comps over 40,000 miles just yet. Still, it presents well given that use – shiny steering wheel aside – with the Sakhir Merino leather not showing undue signs of wear and the wheels seemingly free from kerb damage. It looks like this M3 has been used for a lot of motorway journeys, given the condition, and the one MOT test it's had so far was passed without advisories. The services have all been with BMW main agents, too.

Consequently, if the bank balance can't stomach a new M3, then this one at less than half the cost should be a more than adequate substitute. Not only do you get the bragging rights of a DCT transmission denied to the new car, you can also be very smug about how much less the old M3 weighs than the new one, which ought to have some advantages across the board. And, let's be honest here, this is one of the best looking M3s there's ever been, and that's not something that could be said about the current car just yet. Whether the drive can atone for that remains to be seen…