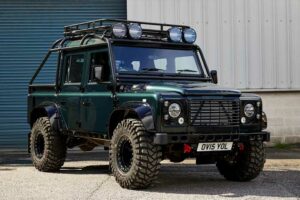 Well, if you're after a Defender that'll really off-road, who better to help?

The upgraded Land Rover Defender is nothing new, but the focus has certainly changed of late as committed folk dedicate themselves to looking cool and using the old warhorse on road. More often than not it seems that modifications centre on improving performance on road rather than off it. Which, if laudable – because making a Defender good on road is like trying to make a powerboat of the Cutty Sark – does seem to be missing the point a tad. Step in Bowler…

We all know Bowler, established more than 35 years ago and with a formidable reputation across the globe for making awesome off-roaders. It was acquired by JLR at the end of 2019 and is now part of SVO; while we’re still waiting on that new V8, we have this, the Bowler Extreme conversion. And when Bowler is using the word Extreme you know it’s going to be serious.

This launch car is based on a Defender 110, though the limited build slots available for each year can also convert a 90 or 130 model. Now sitting on huge 35-inch BFGoodrich off-road tyres (the car itself is hoisted up on a two-inch lift kit), there’s no mistaking this for a common-or-garden Defender – especially with Bowler’s wide arch kit as well. The beadlock wheels, tow hooks and external cage all look straight from a Dakar racer, too, so you couldn’t just use it to pose.

Additional upgrades for the Extreme package include an LED headlamp conversion (the front spotlights that could illuminate a stadium are an extra option) and a new front bumper, plus upgraded hinges, a rear step kit and Bowler sill protectors. Buyers can choose whatever spec they’d like for both interior and exterior, though it’s easy to imagine a few customers signing up for one exactly like this Extreme when they see it.

This certainly isn’t all squaddie mouth and no combat trousers, either, as the Bowler Extreme overhaul also includes the company’s Fast Road box of goodies. This means more power (175hp) and torque (332lb ft) for the diesel through ECU tweaks and an upgraded intercooler, a fast road suspension kit plus bigger brakes (developed with Alcon, no less). Even though this Extreme if about off-roading, then, it shouldn’t be all at sea on the road.

Bowler hasn’t confirmed a price for the Extreme conversion, or exactly how many it plans to make, as each project will be different. Buyers can have their existing car upgraded, or have Bowler source and overhaul a car from scratch. But bear in mind that a single cab Defender from the same year as the demo car is more than £35k as standard and it’s clear the bill from Bowler won’t be a small one. At least the car itself ought to be mega.