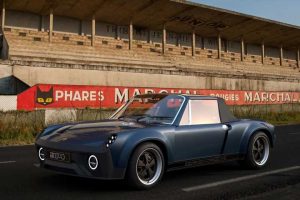 We all know the sort of expertise a proper motorsport arm can bring to the execution of a restomod – see the latest Singer Vehicle Design project, which was built by Tuthill. But what if you don't have the millions required for a bespoke Singer reimagination? Well, it might be worth trying a Fifteen Eleven Design Porsche 914.

It is quite the engine transplant that Fifteen Eleven is doing, though; out goes the standard 914 flat-four or flat-six – maximum output 110hp – and in goes the 3.4 from the Gen 2 987 Cayman. Which makes a rather more substantial 295hp; allied to the Cayman's six-speed manual, it should result in a significant uplift in 914 for performance.

Obviously, Fifteen Eleven plans on doing an awful lot more to its 914 project than simply dropping in a newer flat-six. The body has received bespoke T45 structural reinforcement, and everything else you would want to see upgraded has been: suspension architecture has been nabbed from the Cayman as well, though with adjustable coilovers to further improve it; Brembo four-piston calipers clamp larger, grooved discs; wider Michelin PS4 tyres nestle under broader carbon fibre arches; there's even an active rear ducktail spoiler.

Again, however, lots of that would be expected in a restomod project – it's the details that mark the Fifteen Eleven car out. Like having daytime running lights designed to evoke the Moby Dick 935, the clear Targa roof to "give a sense of open-top driving all year round" and a complete redesign of the bulkhead and fuel tank for a more accommodating interior. It sounds like a pretty thorough job.

Ah, you're thinking, but these are only renders – everyone can make a car look good with enough time at a PC. Fifteen Eleven are adamant this will happen in 2021 though, MD Chris Mellors saying: "All too often we hear of graphic renders being produced with no intention of being built, but here at Fifteen Eleven Design all our efforts are put into making sure any concepts are carried through to completion". Which is encouraging. Apparently the chassis work is now complete, which sounds like a lot of the hard work done, and now the team is embarking on a "very exciting phase of the project". Orders are being taken now, with right- or left-hand drive possible. No price yet, of course, but don't pretend like you aren't just a little bit interested; and if you aren't, see what Fifteen Eleven has done already with its Ford Escort Speedster and E-Type – that ought to help…