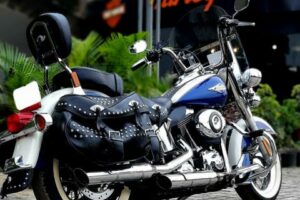 The ride is plush and almost sofa like. It absorbs most bumps and potholes on the highway easily.

BHPian Hamza123 recently shared this with other enthusiasts. If you read most of my threads here they have always started with the words Harley Davidson. But this one is actually about it. Read on

30 years ago studying in school, i happened to miss my bus on a rainy Friday evening. Our school was the Bishops School in Pune camp area and was home to a lot of boarders from different cities and countries. As a treat for them every friday evening a movie was shown in the school auditorium and while waiting for my dad to pick me up the teacher asked me to wait there. I think most of you by now may have guessed the movie, yes Terminator. While the human robot story was too much for me to digest the one thing that struck me was the motorcycle. The big black metal brute of a bike. And that’s how the love affair began.
Over the years of gathering information on Harley Davidson, i knew that one day I just had to own one. There were no 2 ways about it. I just had to be patient and wait for the one. I did mean while buy a Ninja 650, sold it and bought it back  yup it actually happened and you can read about it in my Ninja 650 thread.

So with Ninja back and the sporty (at least for me) side taken care of in this practical no nonsense sports bike, i had 2 options. A Adv or a cruiser.

me :- ” i think i want to add a larger powerful bike to the garage “

wife:- “since you have bought up the topic am sure you have already shortlisted something “

me:- “actually not. but will be a Harley or a adv like a tiger”

wife:- “are you going to buy the Harley even after the tiger”

wife:- “Then lets just get the Harley first “

Buying decision and looking around

Now over the years i had visited and seen many harleys around. Right from the Iron to the Custom 1200. But i knew they were not the one and i always wanted a big Harley and these were just not cutting it. I knew the one i wanted to buy would be a keeper and was not in the mood to compromise Started with some pre owned options for the fat boy which were quite a few. I was more keen on the older twin cam shaped fat boy or Heritage than the new ones.
Kept hunting everyday through olx and through Facebook ads but just no luck for anything.Some were ridiculously priced, some were very high run, and some were out state registration with funky histories.
Then out of the blue came across an Instagram advertisement, of a Heritage classic sitting at the Pune dealership, with just 3300kms on the clock and with full service history. The owner was upgrading to a Road Glide and had got this in for exchange. I was over the moon and went to check it immediately the very next day! Asked my friend and owner of Hyperion Superbikes Mihir to accompany me to take a look at it. After all i needed someone with who thought from the head too!

So on a gloomy Monday evening (i know a but filmy but exactly the same weather 30 years ago! ) we landed up at the showroom and there it was in all its glory. Oh my it was perfect even better than what i had ever imagined. In the first 1 minute of seeing it i knew this was the one. This is where the 30 year old dream turns to reality which was better than i could have ever imagined. But of course we needed to check the mechanicals, and someone who was not so emotionally invested as me, Mihir was there. He gave it a once over with a magnifying glass, checked if everything added up, went over the service history and saw everything checked out. He just looked and me and nodded. A bit of negotiations and the deal was sealed and it was mine. I was finally a Harley Davidson owner!!

Since this was an unplanned purchase, i had to plan my finances. I did pay a token amount on my credit card just so that they block the bike and not show it to anyone. Rest of it was smooth sailing and a big thanks to Mayur and Pavan for constantly keeping in touch on Whatsapp with me. The rest of the finances fell in place in a weeks time and delivery was fixed for 19th August. To say the rest of the week was a blur would be an understatement.Work seemed distracting and I was always eager for the next day to start. And to start and end again till finally D day arrived. This was it. A major milestone was about to be crossed. 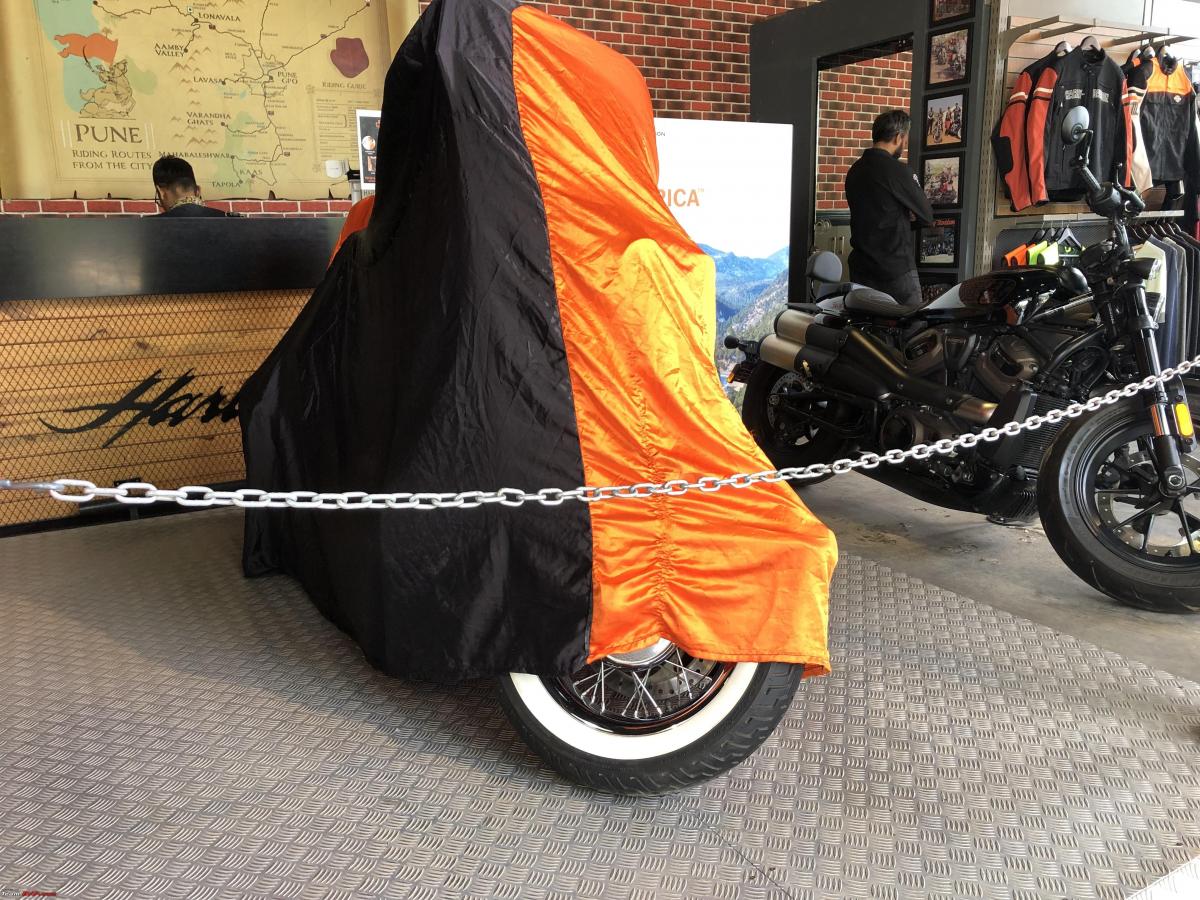 The chain cutting ceremony. Tougher than it looks. Apparently thats the strength you need to handle a Harley Davidson 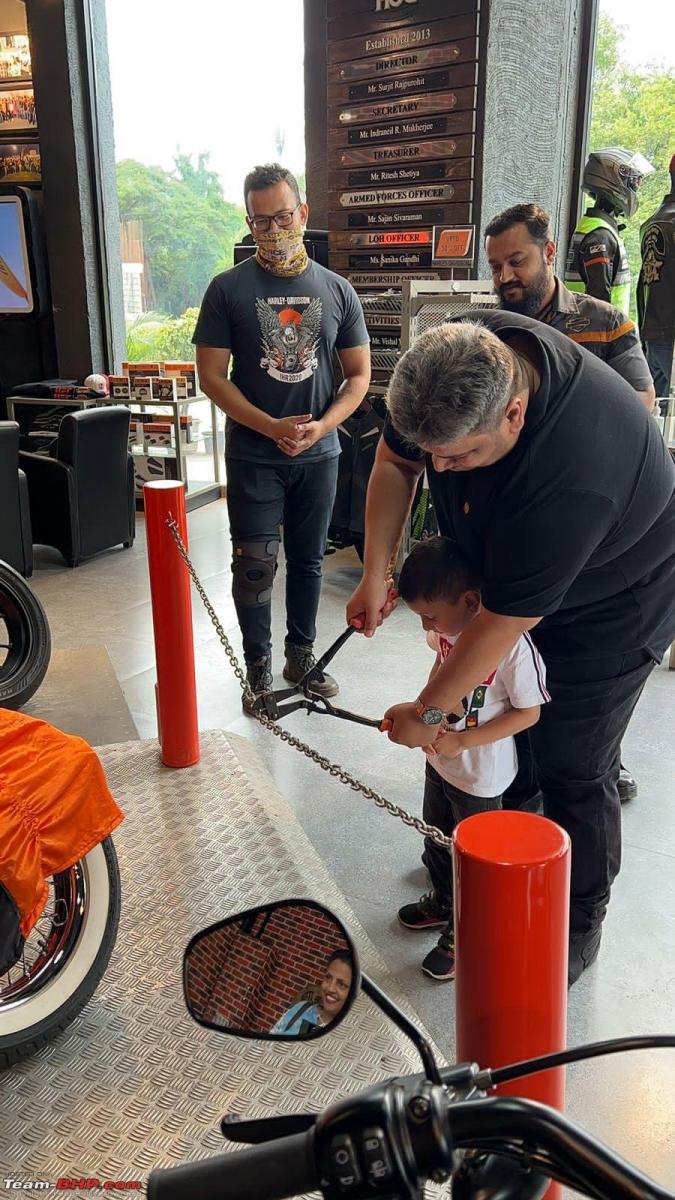 The traditional coconut breaking. Had to do it outside the showrrom as I did not want to smash up their floor 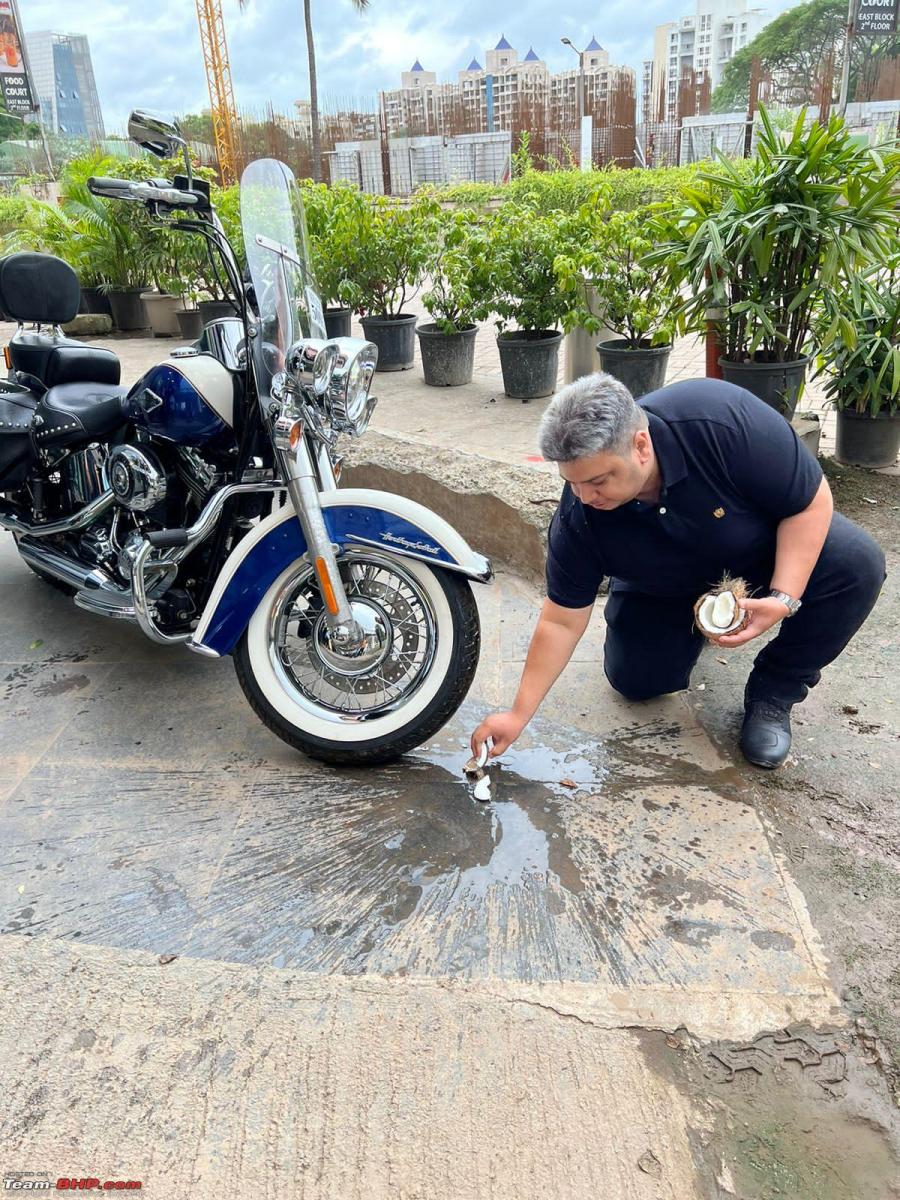 The wife. Finally relieved and Happy. She wont admit it but was teary eyed. We had discussed Harleys for 14 years of our marriage and its finally here. I must say, she played a larger part in this dream than me too, it takes a lot to sacrifice for someone elses dream and that too a selfish purchase like a motorcycle. 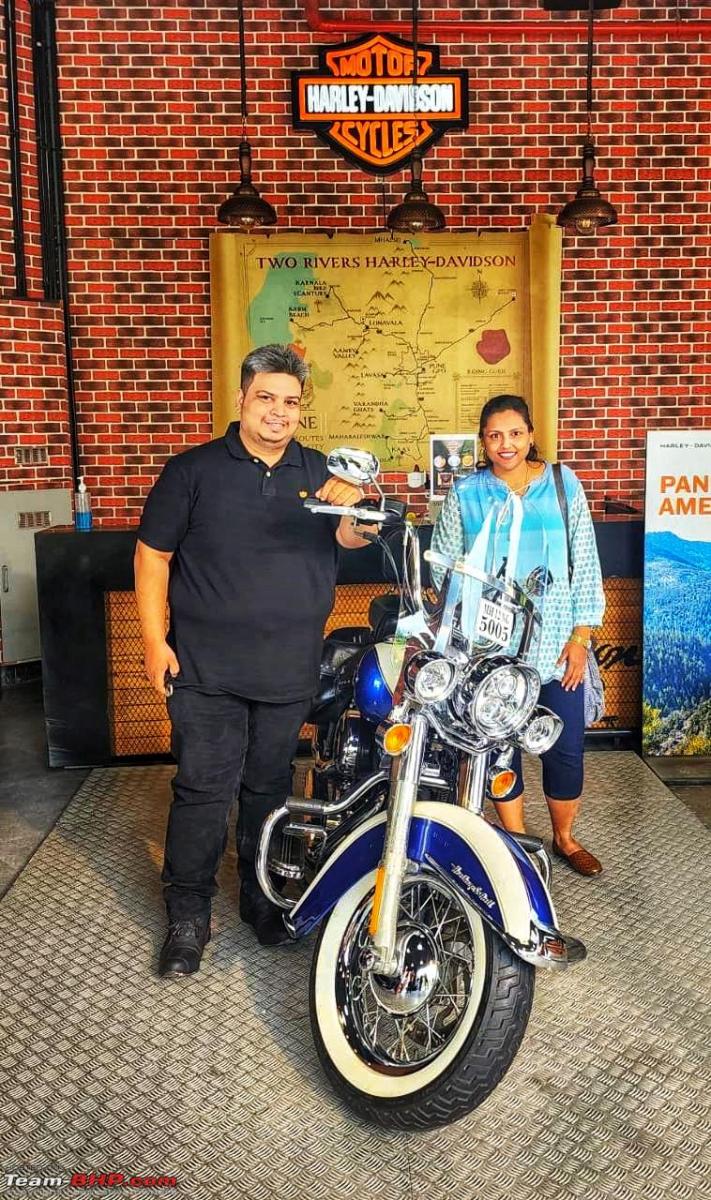 Went home and then for a quite dinner. Was drained, emotionally, mentally and physically and took me a few days to recover !

Its huge. Has tremendous road presence. People want to click pics and selfies with it all the time. I was even asked not once but a couple of times to move aside to proper pictures can be captured. Talk about playing second fiddle to your motorcycle!

Its a sofa on 2 wheels. The seat is huge and wide, and the pillion seat is also comfortable with a wide and comfortable backrest. Big saddle bags which come as standard ensure that there is sufficient luggage space and no backpacks are required

This I would never believe till I experienced it first hand. Yes its a bit cumbersome at low speeds and has the turning radius of a mid size sedan, but once it gets going the 340 kilo weight just vanishes. Having low center of gravity helps as well.

Everything reeks of quality. The chrome, the switch gears the spokes the seats. Everything feels that with proper care it will last a lifetime. The paint job is absolutely superior. Its been custom painted which ill cover later.

I think this is one fun part of owing a Harley. U can accessorize everything. Literally everything. Besides Harley’s own massive catalog there are plenty of aftermarket sellers around. Having a Ninja which barely needs any accessory this was a whole different experience. Its very easy to get carried away and order everything but some restrain was needed! Although the Heritage is almost fully loaded right out of the box with the auxiliary lamps, the pure leather saddle bags with the matching studs and the giant windscreen being standard. But even after that the previous owner has gone all out with additional accessories fit.

Cant be described as anything but painful. Especially in Bumper to Bumper traffic. Its gotten better as i have got used to the gearing as well as added heat shields which have helped in a big way.

I know i have stated this as a positive too but can get nerve wracking at times especially when parked in public. Its hard to let it out of sight.

Not Practical for every terrain

A ride on the Harley needs a bit of planning. Never had to do that on the Ninja. But then again its not made for certain terrain although in my ownership am surprised at the amount of “rough roads” it can handle. Speed breakers especially with a pillion do require some amount of planning.

Cost of Spares and Accessories

Some of the prices of the accessories are plain ridiculous. Probably as its famously called “Harley Tax” Lucky that i have found a pre owned one which was loaded with accessories some of which I would have never installed if I was buying now. Will cover the accessories installed in a detailed post.

The star of the show. The Twin Cam 103cubic engine is smooth and refined. Takes a few kilometers to get warmed up and into its stride but once out of the hghway it really comes into its own and u can cruise at 120kms or so all day long. There is a lot of pull available in almost every gear and its really enjoyable. Accelaration is linear and you should be a cruiser fan to enjoy it.

It took me a little getting used to the 6 speed unit. Very very different from my smooth shifting Ninja 650s gearbox. Every shift is a huge “clunk” and you it does take some time getting used to it. Although am happy to report that that till date there has not been a single false shift. Neutral takes a bit of time to find but not difficult once you get used to it.

This is where the Heritage (and am assuming most softails) really shine. The ride is plush and almost sofa like. It absorbs most bumps and potholes on the highway easily . The huge forks upfront along with the twin gas charged shocks at the rear work brilliantly.

I think this is one area where the heritage scores over most softails especially the fatboy. The handlebar is larger, the seats are larger and the full size floorboards everything falls into place to provide one of the most comfortable saddles to be in. You are sitting into the bike rather than on it and 700 800 km days should not be a problem which I would not attempt on the Ninja.

None after I saw this bike. But just before the Heritage came in the picture I had negotiated a deal for a Fatboy in mumbai which was pretty much stock. Turned out to be a blessing in disguise that deal never went through.

A purchase like a Harley Davidson is an emotional decision. You cannot purchase such motorcycles with your head. For cross country and globe-trotting an adv would make more sense but then who said life has to always be sensible and practical. I had many a times thought of settling down with a sportster or a custom 1200 or something which would have been possible much earlier, but then deep down i knew there were not the one. The heritage pulls at the heartstrings and that for me is one of the most important reasons to buy a motorcycle. I hope the heritage is going to be a keeper (I almost am sure, but I will wait to be certain) and is going to be my partner in the long trips I have planned for the coming year. I also plan to take the HOG membership in the next couple of days and would love to experience the rallies and culture that is so widely spoken about.