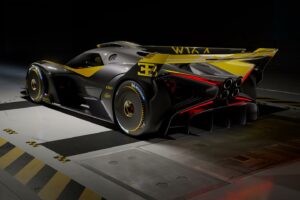 When Bugatti revealed the Bolide as an experimental concept last year, we ventured that it looked a little too well thought out for a one-off project. Now we have confirmation that the car was too good to not be true: 40 examples will be built over the next three years, with first deliveries scheduled for 2024. Bugatti suggests a ‘net unit price’ of four million euros.

Mind-bendingly expensive, perhaps – but the Bolide remains a mind-bending car. With some notable variations, the production version essentially mirrors the earlier concept, and the premise for that was simple: what would a radically light vehicle built around the legendary 8.0-litre W16 engine look like? Bugatti might have gone several ways with the answer, but it’s hard to argue with the minimal bodywork/maximum downforce answer it came up with.

The world is now well accustomed to the idea of hyper-standard track cars, yet even by that measure the Bolide is extreme. Bugatti has opted to walk back the 1,850hp output it claimed for the concept using 110-octane fuel; the production version will deliver 1,600hp and 1,180lb ft of torque using the much more widely available 98 RON grade petrol. Still, the monster engine is said to have been retuned for higher revs per minute, with the cooling system, intake and exhaust also modified to better suit life on a circuit.

To that end, the Bolide is more about what’s occurring around the W16. A Chiron weighs the best part of two-tonnes. Bugatti says its new model will weigh in at 1,450kg. Significantly more than it claimed for the concept, although sufficient for a fairly feisty power-to-weight ratio. The manufacturer doesn’t delve into technical details this time around, but says that an ‘uncompromising lightweight construction approach’ has been rigorously pursued.

So, too, clearly, the prototype racer appearance. Bugatti suggests Formula 1 as visual touchstone for the numerous air ducts and dramatic front end (it called out X-planes when the concept was revealed); either way, you’re buying into arguably one of the most striking cars ever made. “For me, being able to turn the radical thought experiment of the Bolide into reality as a production vehicle is a dream come true as it is by far the most challenging project of my 17-year Bugatti career,” explained Bugatti Design Director, Achim Anscheid.

Turning the car into something that owners will actually drive has naturally meant delving into the nitty-gritty that concept cars typically avoid. So alongside honing its aerodynamics and handling, Bugatti is busying itself with bringing the Bolide in line with FIA rules, which include HANS system compatibility, an automatic fire extinguishing system, pressure refuelling with a fuel bladder, central wheel locking, and a six-point harness. Expect the manufacturer to offer exclusive track days as part of the ownership experience.

Doubtless we’ll hear more about the technical details as the new model approaches completion, but already Bugatti boss, Stephan Winkelmann noted: “we are proud to have succeeded in keeping the production vehicle so close to its technical demonstrator both visually and technically while also enhancing the design, quality, and vehicle safety.”

He added: “I was absolutely amazed by the reactions and feedback from customers from all over the world. We therefore decided to make the Bolide a few-off in order to give 40 customers the opportunity to experience this incredible vehicle. Our team has now been developing a production model – the ultimate driving machine for the track.”