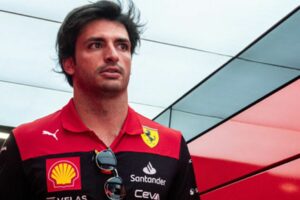 Bouncing, or “porpoising”, has been a dominant point of contention throughout the 2022 Formula 1 season, and Ferrari driver Carlos Sainz has called for an open debate on the effect the phenomenon has on the health of F1’s drivers.

“How much toll should a driver pay for his back and his health in an F1 career with this kind of car philosophy?” the Spanish driver said. “I think we need to open the debate more than anything.”

Porpoising has been a widespread problem across the Formula 1 grid this year and causes the high-speed machines to bounce rapidly due to an increase and sudden decrease in downforce. The phenomenon has arisen due to changes to the sport’s aerodynamics regulations, which were introduced to increase the chances of overtaking and promote close racing.

“I think the regulations are great. They’re doing exactly what we needed for racing. But do we need to run as stiff for our necks and back as we are having to run lately?” Sainz said. “I’ve done my usual checks on my back, neck tightness, and I see this year I’m tighter everywhere.”

“I don’t need expert advice to know that ten years like this it’s going to be tough, and you’re going to need to work a lot in mobility, flexibility”, Sainz added.

So far, it’s still unclear whether the team’s engineers will be able to resolve the porpoising issue, though Formula 1 drivers will be hoping for a quick fix for the sake of their chances at victory and their well-being. Technical upgrades will be brought in by teams across the grid at this weekend’s Spanish Grand Prix, but it remains to be seen if they’ll help solve the uncomfortable dilemma facing Formula 1’s top engineers and teams.