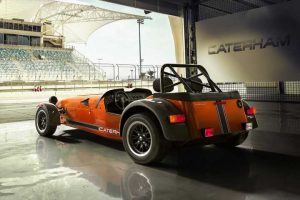 VT Holdings, Japanese importer for the Caterham Seven since 2009, has acquired Caterham Cars outright. The change in ownership, replacing Tony Fernandes and Kamarudin Meranun, was effective from 31st March according to an internal email seen by PH. The news was intended for wider release next Tuesday, but the firm indicated that its hand has been forced by leaks ahead of the embargo.

As well as being official importers for Caterham in Japan – where it sells more than 120 cars a year – VT Holdings is also responsible for bringing Lotuses and Royal Enfields into the country. Clearly it is partial to British icons. As a big retailer group in Japan, it has more than 200 dealerships, as well as additional investments in the UK, South Africa, Spain and Thailand.

All well and good you might think, but this is Caterham we’re talking about; arguably the last thing anyone wants or needs is a faceless conglomerate on the other side of the world assuming control. But there’s much to be encouraged by with VT. Plainly it knows the brand inside out already – which is a good start for such a delicate brand – and VT’s chief executive is Kazuho Takahashi. Not exactly a household name in the UK, perhaps, but you’ll likely have heard of Japanese Super GT, JGTC and Super Taikyu – and he’s raced in all of them over the course of the past 20 years. If there was ever a man to head up Caterham’s parent company, it’s a guy with decades of motorsport experience (as well as, presumably, an amount of business acumen). Sounds like a reasonable place to start.

Takahashi-san said of the deal: “VT Holdings is proud to welcome Caterham to the group. We have not only purchased a globally renowned performance car manufacturer but become custodians of a motoring legend. We will protect and develop the Seven to meet the legislative challenges that lie ahead.”

That legislative hurdles have been mentioned at the outset is heartening. It’s no secret that Caterham faces an uncertain future in a more heavily regulated automotive landscape – and has lacked the investment to do much about it. That Takahashi-san’s has already pronounced a desire to keep the much-loved Seven relevant is certainly an encouraging sign.

Graham Macdonald, chief executive of Caterham Cars, added: “Takahashi-san and the team truly understand the DNA of the Caterham brand, our heritage, our customers and our passions. As a team, we’re all excited about starting to write the next chapter for this very special brand.” We wholeheartedly second that sentiment, and look forward to learning more about what VT Holdings’ takeover will mean in the short term. More news when we have it.