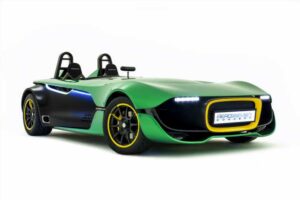 Firm said to be keen on the idea of a simple, light and agile electric sports car – they ain't the only ones

Is there a harder ask or taller in-tray in the British car industry than the one presented to Bob Laishley when he succeeded Graham Macdonald as Caterham’s CEO earlier this year? (Short answer, yes: the bosses of Aston Martin, McLaren and Jaguar have agonising challenges aplenty to consider.) Nevertheless, Laishley, formerly the firm’s Chief Strategic Officer, hasn’t had a second to rest on his laurels since joining from Nissan. After all, Caterham has the end of combustion engines to worry about – and the perils of electrification that come after it. Not to mention a new SVA test that will require newfangled options like lane keep assist and collision avoidance. All somewhat tricky when your car can’t even do wing mirrors properly.

But a quarter century spent at one of the world’s largest manufacturers (some of it as the Global Sportswear Programme Director) has well equipped Laishley for the challenge, and the man is nothing if not ambitious. Aid and abetted by an enthusiastic owner – Japan’s VT Holdings – Caterham is apparently busy hatching plans for a future brand-new, rear-drive electric sports car, one endowed with its virtues of ‘lightness, simplicity, agility and performance’ but also prettier and ‘more modern’ than the Seven – and potentially furnished with a roof, too.

That’s what Laishley told Autocar recently in a wide-ranging interview, where he also helpfully confirmed that his company would continue building combustion-powered Sevens until it is essentially forced to stop. Certainly, this will continue up to 2030 as far as the UK is concerned, but is likely to proceed until 2034 at least on the basis of export market potential – not least in the US. Additionally, he ruled out the possibility of a hybrid version of the Lotus descendent, sagely noting that a ‘1,000kg Seven’ would not be worth the effort.

Obviously, there’s space on the drawing board for an electric-only variant down the road, but while his predecessor famously suggested such a Seven was in development, Laishley is apparently happy to concede that Caterham will need to wait for the technology to catch up with its unique requirements. Hence all the excitement about a more expensive and possibly all-weather EV to be launched in the next few years; a new larger volume model that wouldn’t be quite so bound by the Seven’s unimpeachable and character-defining red lines.

Of course, it would still need to be a Caterham. The company CEO suggested to Autocar that it would retain a steel spaceframe (because it is good at those) and probably a ‘six-panel enveloping body in aluminium or carbon’. But there will be sills and proper doors, too, hence the possibility of a fixed roof. And while Laishley suggested a I’ve-definitely-drunk-the-kool-aid preference for doing without modern niceties like power steering and ABS, the truth is that the car would need to feature all these things to pass a stricter SVA test, which Caterham is definitely aiming to do.

Needless to say, he will also be well aware of Caterham’s previous attempts to colour outside the Seven’s lines. The aborted Alpine-led C120 project is an easy reference point when it comes to the recent past, but the firm also had a much more sustained goes with cars like the Caterham 21 (a nineties-era effort in the ‘prettier, pricier’ department), the oft-forgotten and track-only SP/300.R, and the now decade-old, CSR-based AeroSeven, which was absolutely going to make it to series production – but never did. Mind you, it did have a carbon fibre body and a traction control system, and suggested an interesting design direction. Clearly, Laishley’s talk of doors and sills envisages a different approach – but maybe don’t be too surprised if the end result doesn’t fall too far from the established tree.