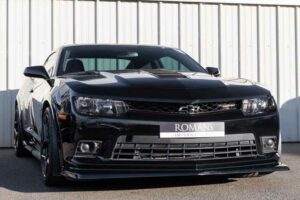 Did you see the Camaro Z/28 on Top Gear the other week? Freddie Flintoff’s own car, it was brought in as something to discuss alongside his review of the C8 Corvette. And though impressed by the new Stingray, the Camaro was clearly his preferred Chevy. So it must be pretty good, not least because Flintoff bought his Z/28 from fellow presenter Chris Harris.

This Camaro is not that car. But it is another Z/28, to all intents and purposes identical to the one owned by Freddie – itself the star of a PH Rise & Drive video – save for the modified rear spoiler. And, in case you hadn’t heard already, the Camaro Z/28 is very far from your ordinary Chevrolet. Or Camaro, for that matter.

The Z/28 was aimed quite explicitly at track driving. That meant the modifications typical of the genre – a dry-sumped engine, uprated suspension, bigger brakes – but also a few that seemed extreme even for circuit cars, including the removal of any carpet in the boot and a standard stereo with just one speaker.

Moreover, Chevy used a host of really expensive parts to improve the Z/28. That uprated suspension was from Multimatic; specifically its DSSV dampers that have subsequently been used in the Ford GT and Ferrari SF90. The bigger brakes were carbon ceramic. And the dry-sumped engine was, of course, a giant V8, here the 7.0-litre LS7. With titanium con-rods and valves as well, it meant all 427 cubic inches (or 7,008cc) could rev to 7,000rpm, producing more than 500hp in the process.

Chevrolet even went so far as to fit 305-section Pirelli P Zero Trofeo R tyres at each corner, which was also used as a the track day tyre option by McLaren. On the Senna. The Z/28 was a really serious thing in other words – albeit a villainously handsome one that came with the timeless appeal of a big V8 and a six-speed manual. No wonder a few went to the effort of importing the Camaro to the UK.

Chevrolet’s hard work paid off, too, as the Z/28 recorded a 7:37 Nurburgring lap. Which doesn’t seem all that fast in the days of seemingly regular sub-seven laps, but is impressive for a car that – even with the air-con binned – weighed 1,732kg. Or about the same as a new BMW M4. And it’s just lapped the Nurburgring in 7:32 with an automatic gearbox. Told you it was a serious track car…

This Z/28, thankfully, comes with the air conditioning and normal stereo fitted. It’s covered almost 11,000 miles since 2014, has had the Trofeo Rs switched for more suitable Cup 2s and looks in pristine condition; given everything – the sheer size and the steering wheel on the left, for starters – the Z/28 probably isn’t a car to jump in for everyday errands. Much better to plan ahead and savour the experience on big roads or, even better, a racetrack. Might need to save up for a fuel kitty, too.

This Z/28 is on sale at Romans for £57,950; obviously it’s hard to pinpoint values for something as rare as the Z/28 (it’s believed just five came to the UK), but it might be worth knowing that Harris’s car sold for £54,000 a couple of years ago. Not a cheap car, then, but then the good ones seldom are. And the Z/28 is a really, really good one – just ask Top Gear.