Cracked speedo glass on my CB300R: 6 months & no spare part in sight! 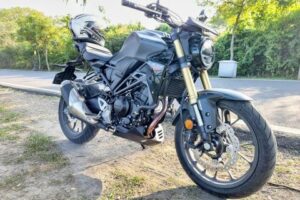 From someone who is an ex-customer of Royal Enfield from past 7 years, I really don’t see any difference between both.

BHPian neeruvk recently shared this with other enthusiasts.

I have an ongoing experience with Honda that I thought I will share.

Some of you might know about my CB300r speedometer issue from the day of delivery. I had mentioned it some time back in this thread when I joined Team-BHP. I have a small crack in the speedometer that has affected the inside screen but everything looks good from the outside.

I was behind BigWing to get it checked from the night of delivery and in the following few weeks they agreed for a replacement and approval. This required a lot of images, videos sent and also visiting their service centre two times to finish all their formalities. Since they didn’t have a meter assembly spare part in stock, they had to place an order. After 6 months of long wait for the part to come and not much of a satisfying response from Honda, I lost my cool and sent an email to Honda 2 Wheelers India. Soon after, I received a call from the company and in next 10 days order arrived at Bangalore service centre. I was immediately told to come to get it replaced and I rode all the way there the very next working day which was a Monday. I was one of the first customers who reached for service that day and I was finally excited to get it changed as I needed to head back to work on time as well.

Upon waiting for 3 hours there and still not seeing anything being done to the bike, I went and spoke to the staff and service manager. Their response was that they’re waiting for approval from Honda. But when I told them that approval was received long back and hence you received its spare part, service manager told me since now there has been a gap of 6 months, he needs to get the approval done again. He seemed to be busy with his laptop and phone calls for getting this done. He sent his share of images and videos of faulty display again standing there and even got on a video call with his officials to show the situation, but looks like that is not enough for Honda. He asked me to come back again after 4 days as approval needs to be done in person by a Honda representative who is visiting that Friday. He promised me it will be done on the same week and kindly asked me to leave for now. I was just done with my 2nd service the previous week from there and I covered 30kms that day commuting for nothing, and yes, it affected my work as well.

Its been a month plus now as I am writing this, no Honda representative has visited yet to check my bike. I reach out to the service manager every single week, in most cases he fails to pick up my phone saying he is always in meetings. Even if he picks up or responds back through text, his answer remains the same – he is awaiting approval from Honda. I am just so fed up and tired with their after sales service at this point, I ended up sending an email to Honda again this week. This has been considered as a complaint and got registered as a ticket and I am waiting for someone to contact me hoping this will speed up the process. And the service manager is aware of this ticket as he has used this as an excuse when I reached out to him this week.

I was already doubting myself on my decision of purchasing this premium bike compared to its competitors in the market due to lack of accessories and marketing from Honda. But to see this sort of lack of support and respect to customer’s issues, what is Honda even doing! From someone who is an ex-customer of Royal Enfield from past 7 years, I really don’t see any difference between both. Where is the the quality and service from Honda that people always talk about?! Even if not premium service at least a decent level of customer satisfaction would do. Another 4 months and it will be 1 year that I am behind the company regarding this problem. It is such as SHAME!

Here’s what BHPian amvj had to say on the matter:

Here’s what BHPian shancz had to say on the matter:

Why is Honda BigWing becoming synonymous with troubling the customer with no sense of guilt or accountability?

There are red lines and time limits for everything but making your customers wait and run around in circles for a year?

To the OP, from what I have gathered across such threads is that pursue the dealer and Honda to the hilt, call Honda multiple times a day if you have to and get your issues sorted. Don’t wait for months for whatever excuse they give.

And this is particularly bad because its not your fault or your job but cases like yours, now, have made me exclude BigWing options from my list or recommendations.

And today however good/refined a product is, if the service is bad implies that the product is bad. We have to realize this as a fact and factor in our decisions. Sad but true.

Seems like the premium experience they talked about was for them

Here’s what BHPian anjan_c2007 had to say on the matter:

Sorry to read about your plight with a flagship model of HMSI courtesy Big Wings.

They should rename the company as Govt of Honda as it appears to be laid back, imbecile and hide bound like most government departments. It’s high time that the company becomes government owned due to its very conducive, govt like work culture.

Even some government departments get brickbats if things go into the delay mode these days.

Here’s what BHPian arjunsatheesh had to say on the matter:

Was blown away by the 300R after a test ride but the price, the number of service centers, the lack of spares, the lack of enthusiasm from the dealerships, and finally the lack of accessories pushed me away from buying it.

I finally went and bought a RE, mentally prepared for poor service, and the exact opposite happened. There were some minor paint issues on my new bike and raised a complaint to RE directly. Within a day the dealership guys came to my house, picked up the bike, rectified the issues, and returned it to me.

Update on the issue:

I received a call (finally!) last Friday from Dhruvesh Honda service manager. He said that approval is still pending even after escalations but there is another fix that could resolve the issue. They wanted to check if the crack is only on the outer case or inside. He said a service person will come to my house this Monday to check it out and change the outer case if that is the problem. This is the same resolution that Silicon Honda service manager provided as well but he never responded to me after my initial calls with him.

Monday and Tuesday passed, nobody came to check. Upon following up again, two service staffs arrived today (Wednesday) evening to inspect the same.

Below are few pictures, lighting was not good since it was late evening. I spoke to the service manager over call standing there and he said he will place an order for a new piece and give me an update by tomorrow. But I was told they’re coming to re-validate the issue and fix it then and there since they had already procured a spare for me. Staffs ended up fixing everything back and at this point, they lost a rubber piece that was supposed to go somewhere inside along with a bolt. They told while they bring the new case, they will get the rubber piece as well.

Also, after putting everything back, it looks like the LCD screen is not aligned properly in the case box. I can see a white line underneath that was not there before. Even the number plate holder is tilted as well.