Dacia Manifesto Is A Plastic EV Off-Roader With Airless Tyres 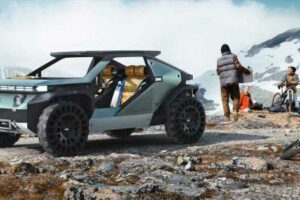 The electric Dacia Manifesto has been unveiled as a rugged concept built for the outdoors. Renault’s budget brand says the concept is a rolling lab intended to showcase pioneering ideas and features that could make it to production cars in the future, but the concept itself will not. It’s very cool nonetheless, and looks like something out of a futuristic sci-fi game – are we now living in the Halo universe?

The Manifesto’s body is made from a plastic Dacia has trademarked as ‘Starkle’, a significant portion of which is manufactured using recycled materials. Dacia says there are ‘no barriers between the passengers and the environment’ – a smooth way of saying the car has no doors or windows. Hopefully that’s one cost-saving method that won’t make it to the next-gen production Sandero and Duster models.

Dacia’s intent was to make the Manifesto hard-wearing and ready for the outdoors, so the car is completely waterproof inside and out. It’s like an Ariel Nomad for the budget-conscious. The Manifesto still includes gadgets like an on-board computer with integrated smartphone connectivity.

Its dashboard is made from cork, and Dacia is keen to point out its YouClip system – a simple solution that allows for users to ‘secure a variety of handy and modular accessories’. This is a feature that the brand says will make it to production models.

The rugged buggy features a single fog light which doubles as a removable torchlight when you need it, and the seat covers can be removed and used as sleeping bags – though we’re not sure we’d consider sleeping inside the Manifesto itself, given its lack of windows and doors.

There’s also a roof rack which can be shifted into multiple configurations which is an evolution of the modular roof bars already available on current Dacia models. The Manifesto’s battery supply can also be removed and used as an external power source with domestic power outlets available.

The Manifesto is four-wheel drive and sports airless tyres on each corner, which Dacia says are puncture proof and last as long as the vehicle. That’s either high praise for the tyres or low praise for the car, but Dacia promises the Manifesto’s… manifesto as a whole is durability and a minimal negative environmental impact.