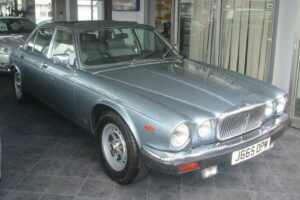 The Series III was an old car even when new, but time has done little to dent its appeal

How long is the typical lifespan of a car? Eight to ten years on average? There have been exceptions, of course – most notably the Volkswagen Beetle, Citroën 2CV and Land Rover Defender, all of which soldiered on for many decades. But, as loveable as those cars were, by the time they called it a day they felt like the relics they were. Now, the same could be said of the Series III. Focus on certain aspects, like the great slab of wood across the dashboard and the mass of Smiths dials set into it, and it looks every bit the 60s creation it was. Here’s the difference, though: if a luxury car is all about comfort, Sir William Lyons’ last creation was still the one of the best-riding cars you could buy in 1992 – the year the last Series III rolled off the line at Browns Lane, some 24 years after the first Series I had done so.

I love the Series III. I bought one when I was 19 – much to the amusement of my mates, who were cherry-bombing about in XR2s and the like. I just loved everything about it, and my Antelope (brown) car was completely and utterly… terrible. It was, what we called in the trade, ‘a proper old nail.’ I’d bought it out of exasperation. After looking at a dozen or so cars that fitted into my meagre budget, when I turned up and saw my ‘nightmare in waiting’ it seemed like the best of a bad lot. So I thought “Oh, what the hell.” It looked okay from ten feet away, mainly because the brown paint hid the other bits of brown bubbling up through the body like rusty springs, and the interior wasn’t bad, either.

But mechanically it needed plenty of work. That was no problem, though. At the time, I was an apprentice with a Jaguar dealer, so I thought I could cope. And I did, just, but honestly, it was like painting the Forth Bridge – every time I thought I’d finished, something else would break or fall off. Like when my next-door neighbour asked if I would chauffeur the bridesmaids to his wedding. “Of course, I’d be honoured”, I said. Then, with less than a week before his nuptials, a cam follower sleeve came unstuck signalling, with a loud tapping noise, that I had a code red. I had to rebuild the head with great haste, which I did. And I was very pleased with myself when it was parked outside the church, having got the bridesmaids there on time, right up until one of the guests strolled over casually, cast his eyes over my pride and joy, and said “That yours, is it? Seen better days, hasn’t it.”

So it was far from a Pebble Beach contender, that’s true. Yet when it was moving, even ‘The Old Nail’ could still amaze with its sublime ride. Like a wounded animal that still knows instinctively to protect its young at all costs, the Series III knew the one thing it had to do, above all else, was protect its occupants from bumps in the road. It was unfailingly comfortable, which was a testament to the great engineering that Jaguar could produce with half the budget of the mighty Mercedes.

Like this car, mine wasn’t badged a Jaguar. It was also a Daimler, which gave it that bit more cache. It was a ‘Six’ and not a ‘Double Six’ like this one and, as I’ve disclosed, it wasn’t in this condition, either. This car appears to be in superb fettle. Being a 1991 car, it’s not far from the end of the production run and well into the reign of the XJ40, but its way more beautiful that its more modern, angular cousin. The design, which Pininfarina so skilfully updated for the Series III, remains effortlessly elegant to this day. It’s got just 64,000 miles on the clock, which is nothing for the V12 – mechanically it’s dependable, as long as it’s serviced well.

The main issues tend to be fuelling and ignition related, and air leaks from the vast number of vacuum pipes. The Borg Warner gearbox can be a little clunky, too, but not terrible. Just make sure you change the fluid and the filter regularly, and the same is true of the diff oil as well. Of course, the main thing is that a Series III should drive well. Don’t expect sharp steering, because you won’t find it. The power steering is vaguer than someone with concussion, but it should still be relatively accurate. If it’s not, then you should check the rack bushes, which split. And, of course, the ride should be faultless and quiet. If it’s not, check for cracked springs, broken drop links, worn dampers and expired bushes. But if you buy a good one, which this one seems to be, and keep on top of the maintenance, you’ll have a wonderful, rewarding classic car to cherish.