It has been a busy time lately for the World’s Fastest Piston-Powered Man, Danny Thompson. He recently went up to the Museum of Speed in Wilsonville, Oregon, to retrieve his 448-mph record-setting car, Challenger 2. He then towed it down to the Dry Lakes Racing Hall of Fame museum in Buellton, California (Mendenhall’s Museum of Gasoline Pumps & Petroliana), so that he and the car could both be inducted into the 2019 class. Also inducted were Team Vesco’s 503-mph Turbinator II turbine car, and the Gyronaut X1 Triumph streamliner motorcycle, which was built and run by the legendary genius Alex Tremulis and horsepower expert Bob Leppan, and ran 264 mph in 1970.

As soon as that ceremony was over, Thompson left Buellton and headed for the Motorsports Hall of Fame of America Museum, towing Challenger 2 on an open trailer 3,000 miles, to the Daytona International Speedway complex in Daytona Beach, Florida. When he arrived he put the car on display next to Challenger 1, which his father, Mickey Thompson, drove to 406 mph in 1960. 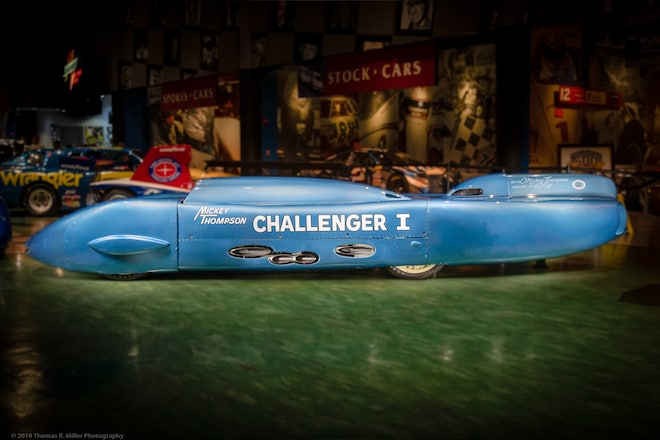 In the evening, Danny Thompson told a rapt audience about the 50-year gap between his famous father’s last run at the Bonneville Salt Flats in Challenger 1 and his record-setting runs in August of last year at Bonneville, where he went out the back door at more than 450 mph and set a new AA/Fuel Streamliner record of 448.757 mph, making it the fastest piston-engined car in history. For you math dummies, that’s 660 feet, an eighth of a mile, per second!

At the Daytona ceremony, Thompson took the enthusiastic audience through the entire eight-year process of taking the 1968 car apart and reengineering every system of the car, including two new Brand Anderson Hemi engines, new clutches, new drivetrain, carbon/carbon brakes, and the new electronics package. He said it took eight years, seven days a week, all the money he had and could raise, and a group of salt-flats experts to complete the program and then test-run the car in 2016 and 2017 before the final assault last August. 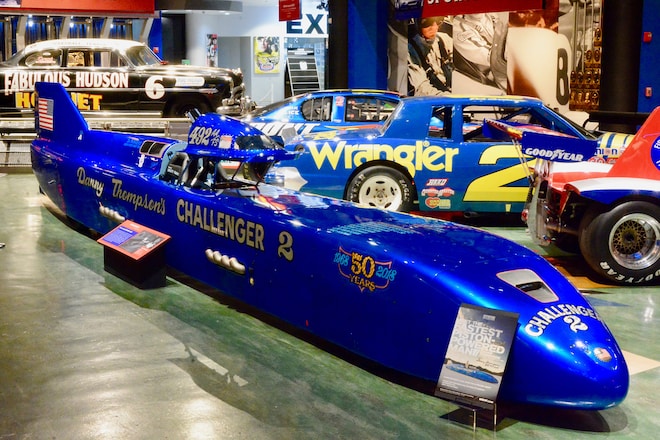 He told the group that, on an early run, at 392 mph, the fire bottles went off accidentally, wetting him down and temporarily blinding him to the point that couldn’t even see his gloves, and got disoriented for a few seconds, but managed to save the car and get it slowed down.

Thompson acknowledged that while the Challenger 2 is retired and on tour around the country, he is not. He told Deluxe that he would like to start all over and build a brand new car—a shorter, lighter, less complex car with a single supercharged nitro Hemi engine, all-wheel-drive, and all the latest technology in order to go 500 mph.