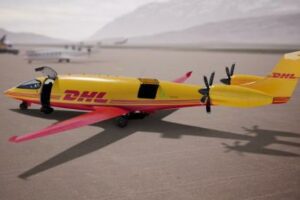 The decision of DHL to shift to electric cargo flights is in line with the brand’s overall sustainability goal of achieving zero emissions by 2050.

DHL will be receiving Eviation’s Alice eCargo planes, which are yet to make their maiden voyage. The Seattle-based aircraft company stated that the Alice eCargo plane will go on its first flight later this year. Eviation also expects to deliver its electric fleet to DHL in 2024.

The decision of DHL to shift to electric cargo flights is in line with the brand’s overall sustainability goal of achieving zero emissions by 2050. The DPDHL Group will be investing a total of 7 billion euros by 2030 to reduce CO2 emissions. Most of the investment will be used in the electrification of its last-mile delivery fleet, sustainable aviation fuel and climate-neutral buildings.

Coming to the electric aircraft itself, Eviation’s Alice eCargo plane is said to be capable of carrying a maximum load of 1200 kg and can be flown by a single pilot. The electric aeroplane is said to have a maximum range of 815 km (440 nautical miles) and claims to require just 30 minutes or less, to charge per flight hour. It will also be capable of operating in all environments currently serviced by the conventional piston engine or turbine aircrafts.

The aircraft is also said to have fewer moving parts, which translates to increased reliability and reduced maintenance costs. The eCargo plane will also come with operating software which will constantly monitor flight performance, ensuring optimal efficiency.