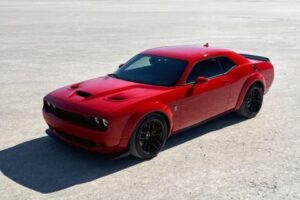 The Ford Mustang sales seem to have taken a heavy hit, amidst the global chip shortage.

The Dodge Challenger has surpassed the sales of both its main rivals, the Ford Mustang & the Chevrolet Camaro in Q2 of 2021.

Looking at the quarterly results of the three brands, the now 13-year-old Dodge Challenger seems to have outsold its rivals, by a decent margin. The Challenger is said to have registered 15,052 units of sales in the last quarter, which is slightly higher than the Mustang’s 14,675 units during the same period. The Chevrolet Camaro, on the other hand, managed to record sales of just 2,792 units in the last quarter.

According to a media report, the low sales figures of the Camaro is due to the fact that Chevrolet has given up on its marketing. While the Camaro isn’t as old as the Challenger, it does feel a bit outdated. Reports also suggest that the future of the Camaro remains uncertain at the moment.

Dodge, on the other hand, continues to market the Challenger. Over the years, the company has also introduced multiple versions of the Challenger, which has helped keep its sales consistent.

The Ford Mustang sales seem to have taken a heavy hit, amidst the global chip shortage. While the Mustang registered decent sales in Q1 of 2021, even outselling the Challenger, the same can’t be said about its Q2 results. Sales of the muscle car in June dropped to 2,240 units; allowing even the electric Mustang Mach-E to outsell its petrol counterpart for the first time.