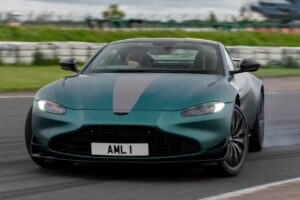 Moers was lured from AMG in August 2020 by Canadian billionaire and Aston Martin F1 team owner Lawrence Stroll, an activist investor who became chairman of Aston’s road car business in April that year after leading a consortium that acquired a 16.7 percent stake in the company. The Vantage is similar in size and layout to the Mercedes-AMG GT coupe developed under Moers, and the two cars share the same 4.0-liter twin-turbo V-8. It’s also, insiders, the CEO’s favorite car of the current Aston Martin lineup. So it’s fitting it’s the first to be given a Moers makeover.

The brief from the boss was simple, says Aston Martin vehicle attribute engineering chief Matt Becker: The F1 Edition had to be quicker around the Nürburgring Nordschleife than the regular Vantage, and the improved lap time couldn’t simply be down to better tires. “I could have just put on a set of [Michelin Pilot Sport] Cup 2s and got the job done,” Becker said. “But he didn’t want that.”

In testing, the Vantage F1 Edition has proven 12 to 15 seconds quicker around the ‘Ring, says Moers. And it’s not down to sticky tires; although the F1 Edition rolls on 21-inch wheels, its Pirelli P Zeros are the same compound as the 20-inchers on the standard Vantage. And it’s not down to more muscle under the hood, either. With 527 hp, the F1 Edition packs just 24 more horses than the regular car, and the peak torque output is an identical 505 lb-ft. No, the Aston Martin Vantage F1 Edition is a master class in the art of chassis tuning.

It starts with the steering. The bushing on the steering column has been pinned to reduce on-center compliance and deliver a more linear response from the moment the steering wheel is moved off-center. The shear panel under the front crossmember is twice as thick to provide a stiffer foundation for the entire front axle assembly. The front spring rate is the same as that of the regular car, as is the compression rate of the front shocks, but the rebound damping rate has been increased by 18 percent. And the front axle geometry has been tweaked, with the negative camber of the front wheels increased from 0.5 degree to just over 1.0 degree.

The rear spring rate has been increased 10 percent and the compression rate of the rear shocks upped 20 percent. The upper control arms of the multilink rear suspension have stiffer bushes, and there’s now a lateral damper between the eight-speed automatic transaxle transmission and the rear subframe to control the secondary movement of the transmission as the car changes direction. “You always have that issue of oscillation of the back end in a transaxle car,” Moers said. “We put everything together with what I know—with 12 years of transaxle cars—into the F1 Edition.”

Although the 255/35 ZR21 front and 295/30 ZR21 rear Pirelli P Zeros share a compound with the regular Vantage’s tires, their different aspect ratio and construction deliver more lateral stiffness and thus quicker response. And finally, the F1 Edition’s large front splitter, turning vanes, and high-mounted, full-width rear wing aren’t there to impress the crowd at cars and coffee: Whereas the standard Vantage generates 110 pounds of downforce on the rear axle and a slight amount of lift at the front of the car at speed, the F1 Edition generates three times the downforce at the rear and 132 pounds of downforce on the front axle.

It’s all subtle, but the result is a car that feels noticeably different. Within the first mile you’ll feel more weight in the steering, but crucially, that additional weight doesn’t—as in too many cars—muffle communication about what’s happening at the front contact patches. You’ll also notice a crisper response from the front axle and a rear end that feels calmer and more planted during changes in direction. You’ll notice, too, a ride that’s much firmer than that of the standard car. Large bumps and heaves initiate a lot of vertical motion when you’re hustling along a bad road, but there’s still a yoga mat’s layer of compliance to it all. The F1 Edition isn’t as brittle, as crystalline, or as noisy as an AMG GT.

On the track, with the suspension and powertrain in their most aggressive settings and the ESP switched all the way off, the Vantage F1 Edition is more agile and alert, yet also more trustworthy than the regular car. You can trail-brake into corners, using the weight transfer to start the car rotating, and then play with the gas to keep it at precisely the attitude you want past the apex. This Aston clearly telegraphs its punches, and its transient responses are smooth and mellow, no matter whether you’re teasing the tires to the limits of adhesion to maximize corner speed or flinging the tail out to have fun.

We’ve yet to drive a version of the AMG-sourced 4.0-liter twin-turbo V-8 we don’t like, and the engine, all brawling muscle and rolling thunder exhaust, continues to bat a thousand in the Vantage F1 Edition. Although the increase in power over the standard Vantage engine is modest, the F1 Edition’s V-8 feels more awake from 5,000 rpm all the way to the 7,000-rpm rev-limiter. As all 505 lb-ft are present from 2,000 to 5,000 rpm, and the top end of fourth gear is good for well over 100 mph, the F1 Edition will crush pretty much any back road you point it at—and with four gears to spare.

A subtle change to the powertrain management system, instigated by Moers, helps the engine feel stronger: The artificial torque cut, designed to make upshifts feel “sportier” and produce a noisy pop-bang-crackle from the exhaust, has been eliminated, allowing the transmission to slip almost seamlessly between ratios even under full-throttle acceleration. “Tobias said [the torque cut effect] was a bit old school,” Becker said. Lamborghini, please take note.

As well as new 21-inch wheels, the F1 Edition comes standard with the “vane”/blade grille that was introduced last year as an option on the regular Vantage for those who hate the gaping catfish maw the car launched with in 2018. There are also quad exhaust outlets, and the car can be ordered in coupe or Roadster trim. Our test car was painted in satin-finish Aston Martin Racing Green, which looks spectacular in person. Other color options include Jet Black and Lunar White, each in gloss or satin finish. The fully equipped interior—air conditioning, navigation, high-end audio, power everything—is trimmed in dark leather and Alcantara, with a choice of lime green, black, gray, or red contrast stripes and stitching.

The Aston Martin Vantage F1 Edition has barely more power than the regular Vantage, and, according to the factory, it’s no faster on paper, with the same 3.5-second 0-60-mph time and the same 195-mph top speed. Yet it’s demonstrably quicker around one of the most demanding ribbons of tarmac on the planet. Don’t be distracted by the big wing and the big wheels. This Aston is a serious and sophisticated driver’s car and one that’s comfortable enough and well enough equipped that it can be driven every day.