Electric Mercedes-Benz G-Class to be showcased at IAA Munich 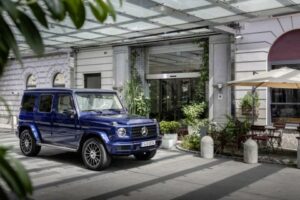 The final production version of the Mercedes-Benz EQG could go on sale in international markets sometime in 2022 or 2023.

Mercedes-Benz is expected to showcase the concept version of its electric G-Class – the EQG, at IAA Munich, scheduled to be held in September. According to a media report, the EQG will not be a new development, but a conversion of the current G-Class to a pure-electric SUV.

Reports suggest that the Mercedes-Benz EQG could come with multiple performance variants, with varying battery sizes. However, the EQG will come standard with dual electric motors and Mercedes’ 4MATIC+ all-wheel-drive system. It is also said to carry forward the same off-roading capabilities as the current ICE-powered G-Class SUV.

While the specifications of the electric powertrain are yet to be officially revealed, reports suggest that the electric G-Class could come with a 108 kWh battery pack, offering a range of around 500 km on a single charge. The range-topping variant could also offer power figures of around 500 BHP.

Reports also state that the final production version of the Mercedes-Benz EQG could go on sale in international markets sometime in 2022 or 2023.