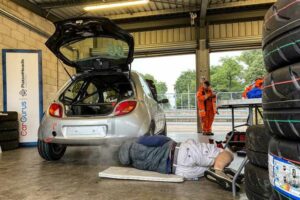 In case you missed it, there was a pretty big endurance race last weekend. That’s right: the Oulton Park 5 Hours was the fourth installment of the 2021 EnduroKA calendar and with a miserable first two outings, we didn’t have high hopes heading into this race.

Team PH still hasn’t learned from all the previous mistakes, and with a near two-month gap since the last race, we left it down to last week to dust off HF06 LSO and get it prepped. We like to work under a bit of pressure, you see. Both rear and the offside front wheel bearings were replaced after some grumbling at Snetterton, on top of a service and general check over.

Of course, the one day in August that it would rain would have to be race day. Pete’s first ever race at Oulton Park back in his Ginetta days was in the wet, so he was looking forward to it. Me not so much. With very little experience driving in the wet on track, let alone racing in the rain, this was our first race in three years that I wasn’t looking forward to.

To make matters worse, three cars ended up in the barrier on turn one in the two qualifying sessions, with little sign of the rain abating. The last race of 2020 at Brands Hatch was the most treacherous we’ve seen, with six red flags in qualifying alone – one of them to recover our written-off car from the gravel trap at Paddock Hill. The safety car came out 22 times in that race; the old Toyo CF2 tyres were simply useless in the rain. The Toyo R888R was introduced as the new regulated tyre for this year and despite being a semi-slick, Pete was doing his best to assure us that they’d be better.

Our qualifying strategy was for Pete to head out first to get some heat into a fresh set of tyres and prevent Olly and I from doing a Sam Sheehan of 2019 and end up in the gravel. Pete briefly set the fastest lap before settling into P6 and letting Olly jumped. With the rain easing, almost everyone was going faster. I say almost, as last in the car, I nervously nursed it around to get my three qualifying laps in, settling for a P12/37 start.

We had a three-hour wait until our race start at 13:25, so plenty of time to check everything over and confidently tick off our to-do list. It was only as the cars were gathered into parc ferme to head onto track that Pete noticed a bulletin against our car in TSL Timing to say that our transponder wasn’t working. Stuart Garland from MSVR saved the day with a loan that we quickly strapped on just as the cars were heading onto track. Drama.

We had to make three compulsory pit stops in this race, so our strategy was for Pete to top and tail the race with Olly and I in the middle. Pete’s confidence in the rain moved him up to P8 within the first hour out on track. Our general strategy is to try and pit during a safety car but remarkably there hadn’t been one for an hour and a half, so we called Pete in and I took over.

Despite the track being drenched, the rain was starting to ease off and with Pete coaching me through the corners over the radio, my lap times were dropping rapidly. In fact, although there still wasn’t much grip in some areas, the car felt pretty controllable. The second chicane through Hislop’s was great fun, with the back end sliding around as the weight transferred from one side to the other. It was Druids and Old Hall that required courage to carry more pace.

It was sod’s law that not long into my stint, a safety car came out, which would have been the perfect opportunity for a driver change. But I was settled having covered a few laps and desperate for the green flag to be waved so I could start racing. I passed five cars in the first lap of the safety car heading in and, despite not being particularly fast, going bumper to bumper with a pack of Ford Kas is a surprisingly big adrenaline rush. It’s a great way for novices to start racing, as you have much more time to think about what you’re doing.

Two laps later, as I headed out of the hairpin with a car either side of me, I was very nearly taken out of the race going into the Britten’s chicane. I narrowly avoided being collected and managed to take the escape road and stay in the race. Up to P6, it was time for Olly to take over as the track continued to dry out.

Olly had an outstanding drive, moving up to P4 with lap times within a second of the front runners. A spin at Druids dropped us back to P6 but with more guidance – read: bullying – from Pete, Olly was back on the pace and put in possibly his best drive of the last three years. Our third and final pit stop put Pete back in the car to finish the race, with a splash of fuel, eventually bringing our car home in P6/37. Remarkably, the safety car only came out three times during the race, which considering the conditions, goes to show how much better the R888Rs are in the wet compared with the 22 appearances at Brands Hatch in 2020 on the CF2s.

Our pit strategy had previously been to brim the fuel tank on every stop, which was an incredibly slow process. This time, we put more thought into how much fuel would be needed and only topped up enough, which led to us being the third fastest team in the pits. This was our first race where everything went as planned, so despite being a little disappointed that we’d missed out on a spot on the podium, we could at least come away feeling like we’d done our best and there wasn’t much room for improvement – other than simply driving faster.

Driving home really got me thinking about the psychology of racing and how your mental state impacts your performance. Olly and I regularly doubt our ability, but with Pete as our coach, it transforms our confidence. Naturally, you must trust and believe in any coach for them to influence your performance, but when Pete told me the R888Rs would be better in the wet, I instantly felt more confident heading out on track.

And when he tells me to take a corner flat, even if it feels terrifying to do so the first time, I trust that he knows what he’s talking about – not least because he’s already proved to himself that it’s doable. He won’t like to take the credit, but our success is largely down to Pete’s capacity for coaching those around him. That and his lap times, which he probably will take credit for.

Congratulations to race winners IP Racing, who put in an unstoppable performance with both IP Racing cars finishing two laps ahead of third place and three ahead of us. This is our final year competing in EnduroKA and we only have one endurance race left at Brands Hatch in November. No pressure.