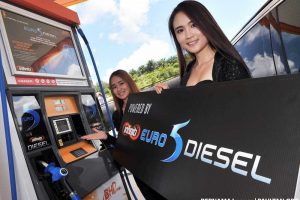 The government has announced that Euro 5-grade diesel is replacing Euro 2M diesel at retail pumps across the country as of today, April 1. The nationwide implementation of the fuel was announced yesterday by environment and water minister Datuk Seri Tuan Ibrahim Tuan Man, Bernama reports.

The fuel was originally set to be introduced on September 1, 2020, as per the federal gazette announcing the implementation date back in December 2015. However, in June last year, the government decided to postpone its introduction to April 1 this year due to constraints faced by various industries as well as the Covid-19 pandemic.

He said that the implementation of Euro 5 diesel across the country will be able to improve the air quality status as the fuel is cleaner and has a lower sulphur content of 10 parts per million (ppm) compared to Euro 2M’s sulphur content of 500 ppm. “The implementation of the Euro 5 diesel specification is part of the government’s efforts to improve the status of air quality as outlined in the Clean Air Action Plan 2010,” he said via a statement.

Euro 5 diesel has been available in Malaysia since 2014, courtesy of individual initiatives by various companies despite there being no mandate to do so at that point. BHPetrol was the first to offer the fuel at selected stations in Johor, followed by Shell and Petronas. By 2016 all the major players, including Petron and Caltex, had introduced the fuel at selected locations.

As for pricing, prior to this, that for Euro 5 diesel was set 10 sen higher per litre than Euro 2M, currently set at RM2.25 per litre and RM2.15 per litre respectively. While it was not reported, the switch to Euro 5 diesel as the only diesel grade now available at the pump should have the fuel following that of Euro 2M, which is presently at its ceiling price of RM2.15 per litre.