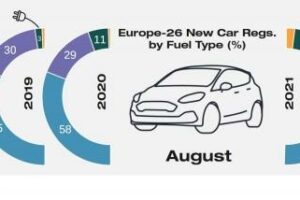 The Volkswagen ID.3 was the best-selling electric car in August 2021.

According to the data released by JATO Dynamics, Battery Electric Vehicles (BEV) and plug-in hybrids (PHEV) outsold diesel vehicles for the first time in Europe in August 2021.

The popularity of diesel vehicles has taken a hit in Europe following the VW emissions scandal. Customers are slowly moving to BEVs and PHEVs and as a result, the market share of petrol vehicles is also dropping. In August 2019, petrol vehicles accounted for 65% of the total sales. This dropped to 58% in 2020.

When it comes to plug-in hybrids, the Ford Kuga took the top spot with 3,512 units, followed by the Mercedes GLC and BMW 3 Series with 2,670 units and 2,343 units, respectively.

The share of BEVs and PHEVs is expected to rise even further as Europe generally witnesses strong EV sales during September and Q4.