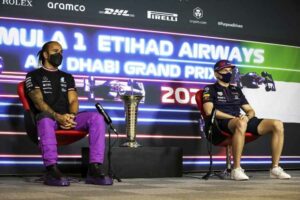 The climax of the 2021 season has everyone talking. It's about time

This is it, folks. By the end of tomorrow. we’ll know. Will it be Hamilton or Verstappen? And whatever your views on either driver – and my God, everyone has one – personally I think that we’ve all been winners this year, whoever happens to take the title. Think back over the last seven years. The Mercedes’ stranglehold at the top of F1. The charge that the sport is boring, again, just like it was at the height of Schumacher’s and Ferrari’s domination between 2000 and 2004. How it needs a challenger on Lewis Hamilton’s level, in a car that’s good enough to win, to make it interesting again. Well, we’ve had that, haven’t we?

Other than the epic fight between Hamilton and Rosberg in 2016, which also went down to the wire, the seven-time world champion hasn’t really been challenged in any meaningful sense. And even during that fight with Rosberg, there was always the sense that this wasn’t quite a battle of equals. Rosberg was a far better rival to Hamilton than most people expected, including me. I thought that, when Hamilton had bedded himself into the Mercedes team, he would break Rosberg, in much the same manner that he has broken Valtteri Bottas. That never happened, though. Rosberg took a reasonable share of the spoils, in terms of wins, podiums and poles, even beating Hamilton 11-7 in the qualifying head-to-head in 2014. But still Hamilton ended up taking the title in 2014 and 2015, as per the formbook.

In 2016, Rosberg raised his game again. So the story goes, he threw everything at it: employed a sports psychologist to strengthen his mind and even sidelined his family life in pursuit of the perfection required to beat his long-term nemesis. That’s what is required to beat Lewis Hamilton. He can be beaten over one race, as even Bottas has showed. But when it comes to performing at his level over the course of a whole season, beating him consistently with equal machinery, few can do it. Even in Rosberg’s all-out 2016 attempt, he still needed a Hamilton handicap – in the form more retirements – to get him across the line. And it by the end, it had taken so much out of him that, just five days later, he retired from the sport.

Coincidentally, as the acrimony between Hamilton and Rosberg was reaching fever pitch at 2016 Spanish Grand Prix – when the pair took each other out – that shone a light on what was coming. Max Verstappen’s talent hadn’t gone unnoticed, but many youngsters with promise have proved to be false dawns over the years. For that race Verstappen had been promoted from Torro Rosso to Red Bull, and when the two Mercedes’ drivers put themselves in the gravel trap it laid a path for Verstappen to prove his resolve.

He had qualified fourth, behind his teammate, Daniel Ricciardo, and with the Mercedes’ drivers out, the Red Bull pair were first and second. But Verstappen’s two-stop strategy proved quicker than Ricciardo’s three-stopper, so it was Verstappen who was leading in the final stages and being chased down by Kimi Räikkönen’s Ferrari on fresher tyres. It would’ve been easy for a young driver, in his first race for a top-flight team, to crack and drop it. He didn’t. He went on to become the youngest winner of a Formula One Grand Prix at the age of 18 years and 228 days. As he has proved over the course of this year, nothing seems to phase his still-young mind.

I remember thinking then that he was the real deal, but he confirmed it at the Brazilian Grand Prix later in the year. Again, Verstappen had qualified fourth, but in a heavily rain-affected race he made everyone else look silly, even though he didn’t win. His various tyre changes dropped him down the order, plus he only just survived a spin that could so easily have ended his day; but his was a masterclass of wet-weather driving, to rival even Hamilton’s 2008 British Grand Prix. He just drove around his competitors with seeming ease, getting creative with his lines and finding grip where the others couldn’t. With just 15 laps remaining he was down in 16th but by the chequered flag he had risen to 3rd. Christian Horner called it “one of the best drives I’ve seen in Formula One.” I happen to agree with him.

Of course, Hamilton has displayed equal genius over the years. That amazing 2008 British Grand Prix stands out, when, in the wet, he finished the race 68-seconds ahead of the rest of the field. Then there’s the fact that he only just missed out on the title in his rookie year, driving alongside that other great, Fernando Alonso. And last year’s Turkish Grand Prix, when he kept his intermediate tyres on for 50 laps, until they were basically slicks, and won by the race by 31 seconds. That prompted Sebastian Vettel to comment “It wasn’t his race to win and he still won it; again he managed to pull something special out of that bag.”

Over the ensuing years, the talk has been about seeing Hamilton and Verstappen going head-to-head, but the Red Bull was never quite quick enough. Until this year that is. Finally, we have been treated to the show we’ve craved, and it hasn’t disappointed. There have been controversies, like Silverstone, when Hamilton took Verstappen out and was judged to be at fault. Or In Brazil, last month, when Verstappen ‘got away’ with forcing Hamilton off the track to keep his position. A tactic he used again at the last race, which was, perhaps, among the most controversial sporting event of the last decade.

That Saudi race had everything, with both drivers riding the very edge of their talents while also being accused of unsportsmanlike behaviour. Over the weekend, it kept the stewards kept busy to the point of distraction. It also proved to be awesome entertainment, but my abiding memory isn’t the controversies, which are mere filler. It’s the number of times this year that we’ve seen these two rise to the top like the cream always does, duelling it out at the front while leaving everyone else in their wake.

It’s fair to say both drivers are polarising, and for different reasons. Max with his inventive attitude to the rules and Hamilton for his off-track lifestyle – mainly the fashion and the politics. Personally, I thought he looked ridiculous walking around the paddock in shorts and luminous-green boots this year, but I also thought his criticism of the human rights records of both Qatar and Saudi Arabia was considered and admirable.

Whichever side you take, there are strengths and weaknesses to discuss, but, together, no doubt these two have put on the greatest show on earth. It’s a trope, but we are watching history in the making. This season will be talked about as one of the greatest, alongside Senna v Prost and the like. And I can’t remember a season like it. That’s why I am happy whoever wins. They are both exceptional. They are both deserving. Hamilton will become the greatest of all time, in terms of championships, or Verstappen will come of age and shrug the monkey of that first title off his back. And here’s a thought: maybe that’ll help him raise his game further? Imagine that. An improved Verstappen, dualling it out with the already-perfectly-honed Hamilton who’s still hungry for his eighth. Maybe I am favouring a Verstappen win, after all.