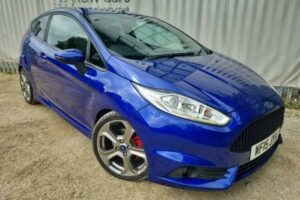 Getting Britain Moving indeed. Time for the shackles to come off…

Yes, alright, the mimed yawns aren’t necessary, and nor is it in fact the law that says we must kick off with a Fiesta ST when discussing affordable fast cars. It’s simply a truth universally acknowledged that the seventh-generation model is, pound-for-pound, an awful lot of hot hatch for the money. Obviously that isn’t a measure of space, and if you’re buying a car with the intention of regularly putting humans in the back, we absolutely wouldn’t recommend it. But if you just want to go really quite quickly on your own for not a lot of outlay – or, indeed, running costs – the ST really is a wonderfully rewarding way to go. Moreover its popularity means there are plenty to choose from. Ten big ones ought to buy one with middling miles and a decent spec. Much like this one. NC

Of course, if you do plan on accommodating adults in the rear on a semi-regular basis, you buy a Golf GTI. That’s the law. Or it is if you’re a vaguely sensible sort, and don’t feel the urge to buy a multi-cylinder engine. Helpfully for the purposes of this overview, the Mk7 has recently dropped into the £10k dragnet, and while the entry-level 220hp version was never the most spirited car to make it ashore, it has an awful lot going for it. For one thing it’s very pleasant to drive in the kind of cohesive, amenable way that alludes most modern hot hatches, and for another, its cabin is superbly laid out and a joy to interact with – virtues that its successor famously does not share. This one has covered a respectable amount of miles in nearly ten years on the road, and is said to have enjoyed the company of just one owner. Bargain. NC

From the likely sublime to the potentially ridiculous. Okay, we’re not necessarily saying you should spend £10k on a 22-year-old Boxster, we’re merely pointing out that you could. The presence of Porsche’s convertible among cut-price competition is obviously well known, and there are plenty of reasons – some more pertinent than others – to give it some heavy thought before committing. But the benefits are well established, too – number one among them being you’ll be a Porsche owner. And while the 986 might be a looking tiny bit dated in this its third decade, it remains a rear-drive convertible of unquestioned pedigree. Here’s one with relatively few miles and just two previous owners. Dynamite. NC

In much the same way that we had to feature a Fiesta ST, so we couldn’t go without a fast Jag. There remains little out there to match them for performance-per-pound value. And with an XF, there’s the added benefit of a 21st-century design, and not something that looks like a supercharged grandfather clock. This isn’t an XFR, instead the SV8 that served as the range flagship until the 5.0-litre tyre slayer arrived in 2009. It carried over the 4.2-litre supercharged V8 used in the S-Type R and previous XJR, which meant 420hp and almost the same again in lusty supercharged torque – big numbers for £7,995. This one isn’t quite perfect, though it does come with full service history and a more vocal exhaust to better appreciate the eight-cylinder rumble. MB

Enter the left-field choice. There are RCZ Rs out there still for more than £20k, yet this one sneaks in under £10k on account of its higher-than-average mileage. But as a demonstrator then with one owner from new, plus a chunk of recent remedial work, that needn’t be as scary as it sounds. The RCZ R was a spectacular return to form for fast Peugeots back in 2013. The standard RCZ was underwhelming; the R was completely absorbing. It made 270hp from just 1.6-litres (!), and a tightly wound chassis really made the most of it. That the RCZ still looked so good further helped its cause, all of which was then undermined by a £32k asking price. Which was too much, and the car was dropped after a year. But for less than a third as much… MB

As the TVR rebirth continues to flounder, so the appeal of a Blackpool-built sports car from the heyday continues to climb. The really late, Smolensky-era cars – the best Sagarises and Tuscans – are now big bucks, but there are undoubtedly still affordable and fast TVRs out there, as this Chimaera proves. It’s a 1995 car with the 4.0-litre V8, which ought to mean around 240hp moving a little more than a tonne. That remains a healthy power-to-weight ratio all these years later, and we all know how much a great soundtrack can contribute to the sense of occasion as well.  This Tahiti Blue Chimaera is nearing 100,000 miles with the history to support it, with the added benefits of power steering and some recent rear axle work. For five hundred quid less than £10k. What a tremendous bargain. MB