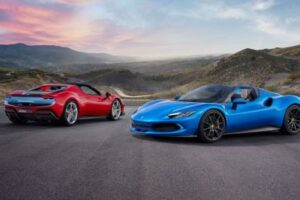 The convertible supercar is said to be capable of accelerating from 0 – 100 km/h in 2.9 seconds and can reach a top speed of 330 km/h.

Ferrari has taken the wraps off its 296 GTS – the open-top version of the brand’s mid-engined hybrid supercar, the 296 GTB.

The new Ferrari 296 GTS comes in the form of a hardtop convertible, capable of being raised and lowered in 14 seconds at speeds of up to 45 km/h. Ferrari has reworked the rear deck to accommodate the retractable roof. The hardtop splits into two sections and is stored away in the front half of the engine bay, allowing the car to feature a rear glass to keep the engine bay visible.

Apart from the mentioned change at the rear, the new 296 GTS remains unchanged. It even carries forward the same cabin layout and comes with identical set of features and tech as the standard coupe. The 296 GTS is heavier though, tipping the scale at 1540 kg, compared to the 1470 kg dry weight of the Coupe. The additional weight is likely from the roof folding mechanism and the necessary structural changes.

The new Ferrari 296 GTS carries forward the same 3.0-litre twin-turbocharged V6 engine paired with an electric motor. The powertrain produces a combined total of 830 BHP and 740 Nm. The convertible supercar is said to be capable of accelerating from 0 – 100 km/h in 2.9 seconds and can reach a top speed of 330 km/h. The hybrid powertrain also offers an electric-only range of 25 km.