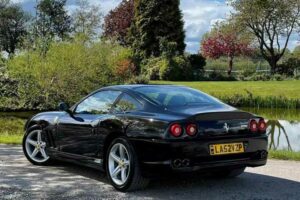 Variety is the spice that keeps Brave Pill peppery, and sometimes causes violent indigestion. Last week’s sub-£3,000 MGB was a late substitution that took the place of what was going to be a considerably more exotic Ferrari. With no better candidates having appeared since then, that same 575M Maranello is being called off the bench for its moment of glory.

The differences between a 90hp British sports car sharing much of its mechanical componentry with a Morris Marina and a 21st Century Italian thoroughbred with a sonorous V12 producing nearly six times as many broken horses are obvious – and for the most part don’t need to be stated. But the contrast between these two Pills does raise one question: how to quantify the automotive risk this column was created to celebrate?

The MGB was, with all due respect, a shed – one that would require huge amounts of time, effort and familiarity with the murkier depths of the British Leyland parts catalogue to make truly good. Yet a fair amount of the debate it stirred up was from those saying anything so common and well-known could never be regarded as properly brave: you can rebuild any MGB, even one that has dissolved to little more than a rust-flecked chassis plate.

By contrast, this 575M is a fine example of what many will regard as being a still-recent Ferrari. One that is being sold at a substantial discount to most of its peers. That seems to be on the grounds of being an imported left-hooker and having covered 74,000 miles: a figure that looks leggy in this rarefied part of the market. On the available evidence it looks good, but you don’t need much imagination to see it encountering a bill bigger than the cost of a freshly restored Concours-grade MGB. It’s a different kind of brave: walking a tightrope rather than rolling around in a bed of nettles. Risk of catastrophic injury instead of guaranteed low-level pain.

Launched in 2002, the 575M – for ‘Modificata’ – was essentially a heavy facelift of the 550 Maranello, one which got minor styling tweaks alongside some more substantial mechanical changes. The most obvious of these was the option of an F1-branded, automated single-clutch transmission, the first time Ferrari had offered one of these robo-boxes in conjunction with a V12. The 575M also got more power, active dampers and bigger brakes.

As the apparently improved version of a much-lauded car, the 575M should have been a winner. But what it didn’t get was a huge amount of critical love, especially from UK publications. The 550 Maranello had been widely hailed as one of the finest-handling front-engined cars of all time – in 2004, evo named it the magazine’s greatest drivers’ car from the previous decade. But the 575 had been softened to become more of a Grand Tourer, feeling hefty and short on discipline when compared with its predecessor, despite being quicker. As Autocar put it: “evolving the 550M should have presented Ferrari with an open goal. Yet, against all odds, it managed to punt over the bar from six yards.”

Ferrari never officially acknowledged such criticism, all of its products regarded as being beyond reproach. But behind the scenes, somebody was clearly listening and what (as with earlier cars) was officially called the Fiorano Handling Pack, as featured on earlier cars, was soon being offered. This brought several track-focused tweaks, few of which were ever likely to be experienced on a real circuit – firmer springs, tighter anti-roll bars and more aggressive brake pads. More relevant was the usefully sharpened driving experience they delivered on real roads, to the extent most magazines walked back on their earlier criticism. The Fiorano pack quickly became close to a must-tick option.

Beyond the chassis tweaks, the arrival of the F1 gearbox was always bigger news. Ferrari’s previous efforts with automated single-clutch transmissions had been generally short on finesse, but the 575’s was one of the genre’s high points, shifting both quickly under intensive use and reasonably smoothly when trundling. It was still possible to create some burning clutch smells when either manoeuvring at lower speeds, or trying out the launch control function offered largely to deliver road-test acceleration numbers. But compared with the finger-biting SMT gearbox of the first-gen Aston Vanquish that was being sold at the same time, the Ferrari was as soft and gentle as an early ’60s Cruise-o-Matic. Most buyers opted for it instead of the still-available option of a six-speed manual.

Performance was never lacking. Even in its softest, as-launched form, the 575M was claimed to be quicker around Fiorano than the 360 Modena. But high-speed cruising was what it was really good at, with much better sound insulation than the 550 and plusher cabin trim. Given the laid-back attitude most of Italy’s road policing units still had to speeding Ferraris when the car was new, this was something that many early write-ups highlighted. It’s a quality that should have aged well, especially compared with the firmer and angrier V12 Ferraris that have followed.

At £55,995, our Fiorano Pack-equipped Pill is the cheapest 575M currently in the classifieds by nearly £17,000, but beyond the struggle at drive-thrus when travelling solo, and a highish mileage, it’s hard to see any obvious downsides. The Nero Daytona black paintwork looks good, the carbon-shelled leather bucket seats seem barely worn and the selling dealer promises a comprehensive service history including a recent service and cambelt change.

Getting picky, there seem to be a modest number of stone chips on the headlights – although it might be condensation. The MOT history shows the car has been in the country since at least 2015, but also that it has covered just 14,000 miles in that time. It failed in 2017 for a non-working rear numberplate light and – steady the horses – an incorrect font for the front plate. There was another glitch two years later with non-functioning front indicators, a missing front reg plate altogether and another wrist slap for a non-standard rear plate.

Running costs will be high, of course – that pretty much goes with the territory. 550 and 575 owners report that paying anything less than £2,000 a year on maintenance and upkeep constitutes getting off lightly. (For reference, a friend with a 550 once worked out that the combination of wandering alignment and punctures meant he was averaging £1/mile on tyres.) Much more substantial bills can bite as suddenly and unexpectedly as the shark in Jaws. Yet against that, 575M values still seem to be rising slightly, if less than those for the late 550 manuals that are now in much higher demand than when they were new. You’d need to be heroically courageous to even consider one – but that’s what brings us here, right?