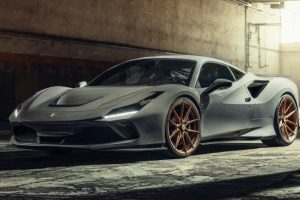 As its mid-engine models so often are, the Ferrari F8 is probably the best-looking prancing horse on sale right now. Yes, it’s an evolution of the 488 GTB, which itself was an evolution of the 458 Italia, but that doesn’t take away from any of the appeal. It is a near-$300,000 monument to self-aggrandizement, but for some, a stock F8 simply isn’t enough.

Luckily for them, tuners such as Novitec exist to take their (already spectacular) supercars to the next level. This time the German tuning firm got its hands on a Grigio Scuro F8 and went to town. The first thing Novitec did was, of course, add more power. The standard F8 “only” makes 711 hp and 568 lb-ft of torque, so Novitec turned the wick up a little bit. Thanks to a tune and a new Inconel exhaust (that’s plated in 999 gold for better heat dissipation), the F8’s twin-turbo 3.9-liter V-8 can make up to 802 hp and 662 lb-ft of torque.

If you wanted a sleeper F8 that can finally take down that McLaren 720S at the drag strip (that is, assuming you can actually call a Ferrari a sleeper), then Novitec’s got you covered. But Novitec isn’t usually known for its subtlety, and as such has made some cosmetic improvements to the F8, as well. There is a two-piece front splitter, the bottom of the front air dam is redone in exposed carbon fiber, and the hood duct gets a discrete, yet gorgeous, carbon-fiber lip.

There are new side skirts and the rear deck of the car is outfitted with a carbon-fiber wing. Buyers also have the option of fitting a new, deeper rear diffuser with little carbon-fiber winglets for a more aggressive look. Novitec claims these mods add downforce, but since we don’t have a wind tunnel handy, we’ll have to take the company’s word for it. The whole car is lowered by 1.4 inches and is set off by a set of satin gold 22-inch wheels that look stunning (even if we think the wheels look a tad too big for the car). Buyers will also be able to customize their F8’s interior to whatever specification they like (assuming they didn’t already do that at the Ferrari factory).

Novitec didn’t mention how much all this excellence costs, but it’s safe to say that, if you have to ask, well, you know …