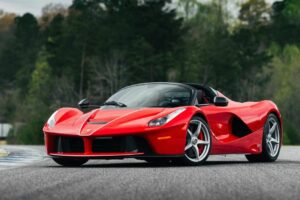 Within a matter of hours a Ferrari LaFerrari Aperta with just 161 miles on the clock has broken the record for car auction site Bring A Trailer’s highest ever bid. The price is currently standing at a cool $3,510,000 (approximately £2,760,000) at the time of writing.

That’s despite the auction being open for a further 13 days, so there’s still plenty of time for the sale price to increase drastically. Currently the most expensive car sold on BaT was a pre-war Mercedes-Benz 680 S Sport/4, which reached $2.8 million (£2.2 million) in March.

Designed as a technological showcase to celebrate Ferrari’s 70th anniversary, it’s no surprise the LaFerrari Aperta is attracting the attention of some very enthusiastic bidders. Only 210 examples were ever produced between 2016 and 2018, and clients were exclusively selected by Ferrari by invite only.

The LaFerrari Aperta is propelled by the same 6.3-litre V12 engine and electric motor used in the humdrum coupe version of the LaFerrari for a combined power output of 950bhp and a torque figure of 664lb ft. it’s capable of a 217mph top speed and can accelerate from 0 to 60mph in just 2.8 seconds.

This particular example is finished in Ferrari’s Rosso Corsa shade of red with a black leather and alcantara interior finished with red accents.

How much do you think the winning bid will be? Let us know in the comments…