Home » News & Features » Florida Racing During the Coronavirus Threat: Gyp Stacks are Coming, and the Dirt is Flying

Florida Racing During the Coronavirus Threat: Gyp Stacks are Coming, and the Dirt is Flying On an otherwise racing-silent Saturday, V8 engines howled, the smell of oil and gas and burning alcohol and wet clay hung in the air, hot dogs and four-slice Hungry Howie’s pizzas were dispensed through the single open concession stand window.

Track T-shirts hung from hangers and fluttered in the light breeze.

In the grandstands, families and friends sat together, but the small groups, for the most part, practiced the ultra-modenart of “social distancing.” And there was a lot of hand-washing in the restrooms.

In balance, last Saturday night at East Bay Raceway Park in Gibsonton, Florida, just outside Tampa, seemed far more normal than life a mile outside its boundaries, where stores were overrun by people willing to drive an hour to get one more six-pack of toilet paper or the last bottle of hand sanitizer.

Of course, after President Trump’s directive delivered Monday night that, among other things, we “avoid gathering in groups of more than 10 people” for at least the next 15 days—which would run through the first day of next month, April Fools’ Day, of course—we may not see any more actual racing, anywhere, for some time.

While some short tracks closed voluntarily over last weekend, and at least one was shut down by a visit from the county sheriff, several in Florida decided that the show must go on. That seemed appropriate in Gibsonton, aka “Gibtown,” which became the winter home to hundreds of carnival workers, perhaps most notably people who were once called “sideshow freaks.”

Early residents were Al Tomaini and his wife, Bernice: Al was 8 feet, 4 inches tall, and Bernice was 2 feet, 6 inches. Most are gone now—Al died in 1962 and is buried just up the road in a very, very long casket—but there has always been an odd and slightly sad theatrical air surrounding Gibsonton.

For sprint car driver Shane Butler, who grew up in Tampa, racing last Saturday at East Bay was a no-brainer. Butler, son of Florida sprint car legend Stan Butler, has a national reputation as a pavement sprint car driver—he’ll be competing in his 10th Little 500 at Anderson, Indiana, this May (he hopes)—but he couldn’t resist the opportunity to dial in his dirt-track skills.

Butler won the 15-lap sprint car feature, which was one of six classes to race: Besides sprints, there was the late model sportsman class, the V8 Warriors (1980s metric Monte Carlos), Outlaw 4s (little late models with four-cylinder engines), Micro Sprints (with motorcycle engines) and the Gladiators, which answers the question, “What ever happened to all those Dodge Neons?”

There were 17 cars in the V8 Warriors class and a whopping 23 Gladiators, which may be the largest field during a pandemic in modern history.

In talking to our neighbors in the grandstands—from as at is factory distance—the consensus was that it seems safer here, outside, with the aforementioned light breeze, than it did earlier in the day in the checkout line at Walmart.

The crowd seemed down by about a third, and the same with the field of cars, but that’s fine: Aside from being struck in the head a few times with matchbox-sized chunks of clay when the sprint cars worked the high groove, we are confident we emerged safely. 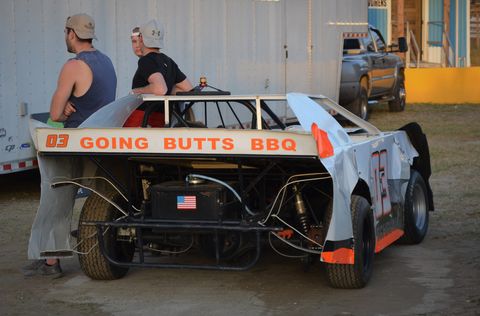 There was another reason Shane Butler wanted to race at East Bay: “This is home. This is where I grew up. I wanted to come here while I still can.”

East Bay began racing in 1977, and last September, owner Al Varnadore announced that he had agreed to sell out to the fast-approaching Mosaic Co., the world’s largest producer of potash and phosphates. It isn’t that Mosaic needed more land to make its products, but it needed more land to dispose of them.

“This is home. This is where I grew up.”

Stunningly large ridges, perhaps 200 feet high, surround East Bay on two sides: They are called gyp stacks—for phosphogypsum stacks, which is what is left when you turn phosphate rock into fertilizer—and the two dozen or so gyp stacks in Florida are among the highest seemingly-natural points in the otherwise flattish state.

Gyp stacks contain enormous amounts of highly acidic, radioactive water, and sometimes it leaks out, like when a sinkhole opened up under part of a Mosaic gyp stack in Mulberry, Fla., draining 215 million gallons of the water into … wherever it is stuff goes that falls into sinkholes. (Don’t laugh at Florida sinkholes: In 2013, one formed under Jeff Bush’s bedroom in nearby Seffner, swallowing Bush as he slept. His body was never recovered. Said his brother, Jeremy: “All I could see was the cable wire running from the TV going down into the hole.”)

The gyp stack is coming. So each night at East Bay seems a little more valued than the last —even the ones where people sit 6 feet apart in the grandstands.