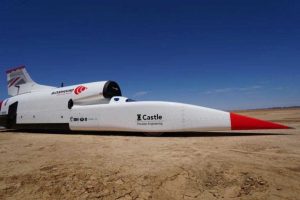 Interested in acquiring a rocket- and jet-powered land speed record contender? Then today’s your lucky day because the Bloodhound LSR is for sale. We can guarantee two things: it won’t be cheap, but it will be fast. Very, very fast.

Last year, the Bloodhound LSR hit 628 mph in South Africa, and the people responsible for the high-speed vehicle firmly believes the ThrustSSC’s previous record of 763 mph—set nearly 25 years ago—is theirs to break. But not under current ownership. Ian Warhurst is not only putting the vehicle up for sale, but he’s stepping down from leading the project as a whole. This means that Grafton LSR Ltd., the holding company that owns the Bloodhound LSR project, could be yours.

It’s not just a “hop in and go” sort of situation. The next step in the program is to take the car to the 800-mph mark, which will validate how the car handles such rarified speeds. Warhurst told the BBC that it’ll take £8 million (roughly $10.9 million at today’s exchange rate) just to prepare the vehicle for this task. The total cost to take over the project is unknown. The team will then need to crunch that data and evaluate if changes are needed to crest 1,000 mph—the ultimate goal of the project.

That 800 mph mark also has the happy side effect of snatching the record from the ThrustSSC. If the Bloodhound LSR never turns a highly specialized wheel again in anger, then at least it would have that achievement under its belt. Either way, the new owner will need to give the LSR’s two thrust sources a workout. The Rolls-Royce EJ200 engine is good for 20,000 pounds of peak thrust, and if that weren’t enough, a rocket that’s powered by high test hydrogen peroxide adds an extra 10,000 pounds of peak thrust to the mix.

Hopefully, someone can guide Bloodhound out of its financial difficulties of late and get the LSR running on dry lake beds once again.