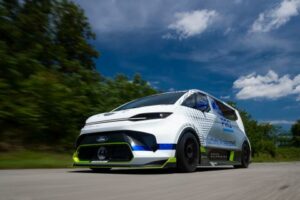 The Ford SuperVan concept is based on the recently unveiled E-Transit Custom.

Ford has unveiled its radical Pro Electric SuperVan Concept at the ongoing Goodwood Festival of Speed in the UK.

The new concept is the fourth in a series of SuperVans dating all the way back to 1971, when Ford installed a Le Mans winning GT40 V8 in a Mk1 Transit. The latest iteration, though, is electric. It comes packed with four electric motors and is paired with a liquid-cooled 50 kWh battery. The electric powertrain on the Ford SuperVan is said to produce a massive 1973 BHP of peak output. The electric SuperVan also claims to be capable of accelerating from 0 – 100 km/h in under 2 seconds.

The battery is said to be mid-mounted, allowing for optimal weight distribution. The battery pack on the SuperVan also comes with a fast charger, capable of being completely charged in just 45 minutes.

The Ford SuperVan concept is based on the recently unveiled E-Transit Custom. The SuperVan features a comprehensive aero package with prominent front splitter, side skirts, massive rear diffuser and a roof-mounted wing. The SuperVan also comes with fully-darkened taillights. The concept comes with a reworked suspension at both axles, motorsport-grade front and rear subframes and new brakes borrowed from Ford’s race cars.

Inside, the Ford SuperVan comes with bucket seats, a full roll cage and a large display with Ford’s latest SYNC4 infotainment system. The SuperVan also comes with five driving modes: Road, Track, Drag, Drift and Rally. It even gets a “tyre cleaning” mode, which basically refers to a burnout, which works by locking one axle.