Home » News & Features » Formula 1: Will Mick Schumacher have a seat with Haas for 2023 season

Formula 1: Will Mick Schumacher have a seat with Haas for 2023 season 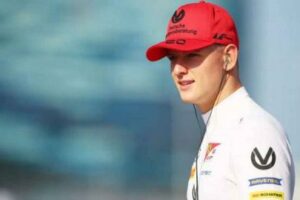 What they need is not a great driver, but a good one, who can push their cars so they finish consistently above the usual suspects at the back of the grid.

BHPian supermax recently shared this with other enthusiasts.

With Haas being in no hurry to proceed with a simple contract extension, and with not just team principal Günther Steiner but also team owner Gene Haas making scathing remarks about Mick, one wonders if their minds are already made up, to dump Mick. In their support, Haas is a back-of-the-pack team with neither money nor the will to groom the next line of great drivers, like say Alpha Tauri. What they need is not a great driver, but a good one, who can push their mediocre machinery so they finish consistently above the usual suspects at the back of the grid, and try and make the most of squabbles up the order, to snatch the odd multiple point finishes, and all this without wrecking the cars.

To be fair to Mick, his career couldn’t have taken off in a worse way, given that he had a teammate he could learn nothing from. Had he only had Magnussen as his teammate from the beginning, chances are good that he’d have learned more from his more experienced stable-mate.

Mazepin was so bad that he made Mick seem so much more mature than he really was, so the minute Magnussen came aboard, Mick was suddenly looking like a raw rookie, at least during the first half of the 2022 season. Normally, a driver who has the potential for great things reveals this early, be it Lando Norris, George Russell, or Max Verstappen. The fact that pretty much all of Mick’s first season was a washout, both in terms of a crappy car and a crappier teammate did him absolutely no favors.

Mick’s uncle Ralf raves and rants, but the fact is that Mick hasn’t shown himself to be a great driver who could be expected to achieve great things if given a much better car. Michael Schumacher fans are upset about the treatment Mick is getting, and while it’s a fact that he’d have been treated very differently if only Michael would have been up and around, the fact is that Mick’s nowhere near ready for a seat in Ferrari or any other top team.

The current driver lineup at Ferrari is not only the best driver combination across the entire field, but the fact that both drivers are so young means that there’s neither the possibility of direct openings at Ferrari nor the prospect of other drivers moving to Ferrari from elsewhere on the grid, opening up new places where Mick could fit in.

Ralf believes that Haas has no option but to sign Mick on again, but he’s wrong there. While somebody like Nick Hülkenberg seems like a has-been, he’s exactly the kind of driver Haas need; Nick is very consistent and effective at driving mediocre machinery close to or just over its limits while still not exceeding his own limits. He’s got experience by the boatloads and is more than happy to hop into the car at short notice, not at all unlike Magnussen was.

What Mick really needs is a team which is patient enough to work with him while he improves, and he’ll need a strong driver as a stable mate. If only he’d had a teammate like Alonso, or Valtteri, he’d have learned so much more already, but now, he’s in the uncomfortable position of no longer being a rookie, with two seasons under his belt, and with very little improvement to show for.

The worst part is that he’s now on the verge of having no drive for the upcoming season, a season where two confirmed newcomers, Nyck de Vries and Oscar Piastri, and a potential third newcomer in Logan Sargeant will be doing all they can to prove to the world that they are the future champions in the making, so a year’s sabbatical could well mean curtains on his career.

Here’s what BHPian narayans80 had to say about the matter:

If you take out the fact that he is the son of the legendary Michael Schumacher, would we even talk about him? Would he have landed in a Haas seat? And he probably is in the Haas seat because of Ferrari.

Barring extraordinary cases like Lewis Hamilton, most other drivers start their careers in crappy cars. Alonso started in a Minardi, Senna in a Toleman.

The way he has driven, he hasn’t done himself or Haas any favors. While the Ferrari works team is 2nd in constructors, the Haas is languishing at second last. They would rather dig themselves out of this position than save Mick’s career.

Here’s what BHPian Turbohead had to say about the matter:

Nah! Mick had a few good drives but beyond that, it’s not worth mentioning. He has a long way to go.

And when a team principal says that they don’t want to continue with him to the media, it doesn’t help his career at all.

He really needs to pull his socks up and prove his critics wrong if he wants to return to F1. Until then, he’s a write-off.

Here’s what BHPian Cyborg had to say about the matter:

It seems the only way for Mick Schumacher to continue in F1 is if he becomes a pay driver. The family could provide funding to the Hass team in order for the legacy to continue, with the hope of him improving to the next level soon.

He, unfortunately, does not have the brilliance of his illustrious father nor can match up with those around him.

Here’s what BHPian Mechb63 had to say about the matter:

Haven’t we seen Haas do this before? Create a buzz in the media to check who would be interested to join them and end up retaining their old line up.

I have a feeling that Mick has at least another year with Haas.