Flowers are blooming all across the UK, as Spring has emerged once more in Forza Horizon 4. Series 19 is on the home stretch this week, bringing forward a fresh helping of content.

The latest Spring Playlist brings more prizes for 50% and 80% completion. There’s no cars making their debut this week, but you can have another chance to win an iconic Porsche race car. 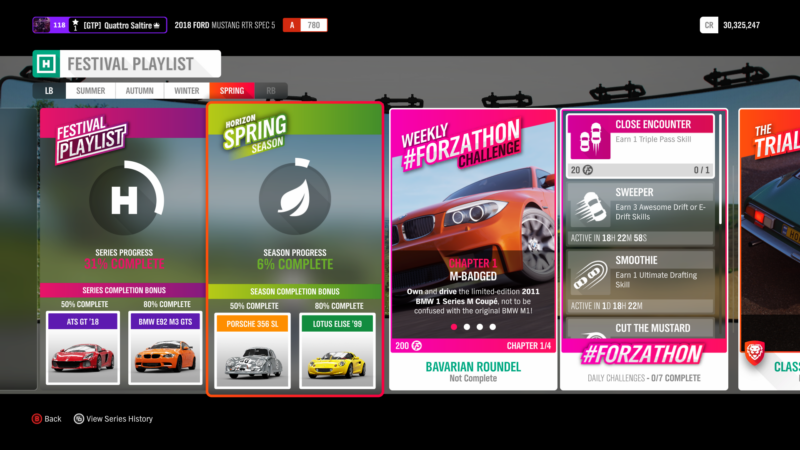 This week’s prizes are all returning content, with the 1951 Porsche 356 SL Gmünd Coupe as the headline act.

Though it may not look like much, this small racer helped launch Porsche towards motorsport immortality at the Le Mans 24 Hours, taking a class victory. The 356 SL certainly carries humble underpinnings, despite that racing pedigree. The 1.1-liter flat-four produces a measly 46hp, meaning it won’t be setting any speed records any time soon. However, a weight of just over 1,400lb ensures fun and agile handling.

Alongside the Porsche sits the 1999 Lotus Elise Sport 190. Channeling the philosophy of lightness, the Elise weighs a featherweight 1,477lb. It also features a 1.8-liter engine putting out nearly 200hp, giving performance equivalent to much more powerful rivals.

Standing above the rest is the 2016 Zenvo ST1. The first hypercar to come from Denmark certainly pulls no punches in terms of performance. A 6.8-liter V8 engine under the hood produces a titanic 1,086hp, thanks to a combination of supercharging and turbocharging.

If you want the Zenvo, you’ll need to win the “Flight Of The Valkyries” championship to get it.

Another Showcase Remix returns for Spring as well. “Commuter Blues” will see you racing towards Edinburgh against the Flying Scotsman. Your weapon of choice for this event is the 2015 Porsche Macan Turbo.

This week’s events and prizes are listed below.

Flight Of The Valkyries 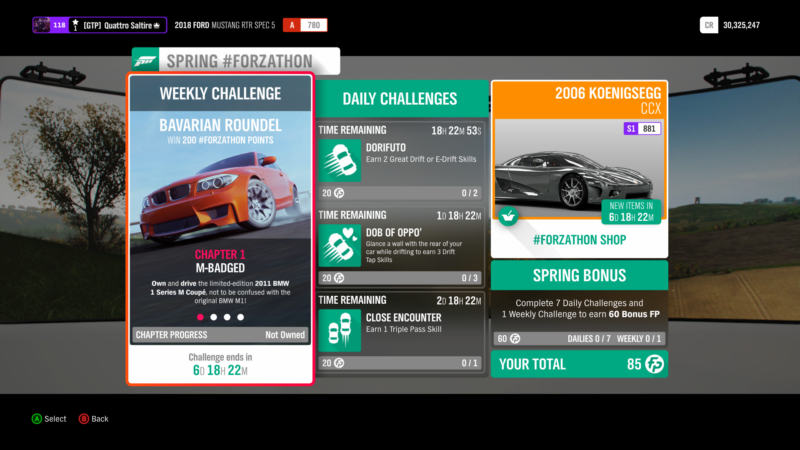 This week, Forzathon looks at a BMW M car that has become a modern cult classic: the 1 Series M Coupe. Grab this turbocharged brute to get things rolling.

Next up, head for the races and take the 1M to victory in two Road Racing Sprint events. Afterwards, let your creative driving skills shine, as you’ll need to earn a total of 500,000 Skill Score in order to progress.

To finish things off, take your 1M for a drive all around the UK. You’ll complete the final objective once you’ll covered a total of 15 miles. 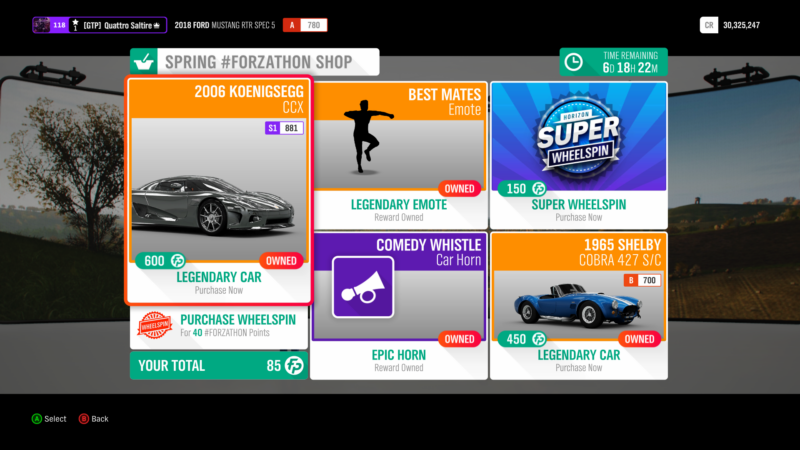 Big, powerful V8s are the main theme in the shop this week. Standing proud as the main event is the 2006 Koenigsegg CCX.

Replacing the CCR, the CCX was supposed to be more usable for drivers, but the powertrain says otherwise. The CCX features a 4.7-liter twin-supercharged V8 producing 806hp. The only thing pressing the back tires in to the road at nearly 250mph is a small rear wing.

You’ll have to pay out a sizable 600 FP for the CCX, but if you’re after one of the most exciting hypercars around, now is the chance to jump on one.

Joining the Koenigsegg is the 1965 Shelby Cobra 427 S/C. Dropping a large engine in to a small British roadster in the 1960s would sound like an accident waiting to happen, and it usually was, but the Cobra went on to become an icon. With a massive 7-liter V8 pumping out 425hp, you’ll need plenty of talent to tame this unruly beast.

At 450 FP, the Cobra is a slightly cheaper option. If you want to save a few million credits from buying one in the Autoshow, this price in the shop seems like a good deal.

Novelty items available this week are the Best Mates emote and the Comedy Whistle horn.