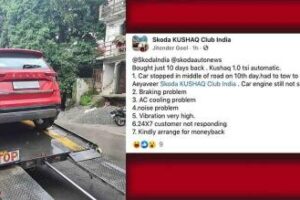 Kushaq owners were reporting a complete loss of power / engine cut-off on the Kushaq 1.0L variants.

The Skoda Kushaq was launched in June this year. There was a lot of excitement and anticipation about this car as it was the first product under the India 2.0 project. The Kushaq has been the highest-selling model in the Skoda lineup for the past two months, despite its premium pricing,

However, it hasn’t been all smooth sailing for Skoda. Ever since the car was launched, there have been multiple reports of breakdowns. Kushaq owners have been taking to social media to voice their frustration, and rightly so.

Customers are reporting a complete loss of power / engine cut-off on the Kushaq 1.0L variants. This is accompanied by the Electronic Power Control (EPC) warning light in the instrument cluster, which suggests that there could be an issue with the vehicle’s accelerator pedal, fuel injection throttle body, traction control or cruise control.

Now, it seems Skoda has finally found the cause of all these breakdowns. According to Zac Hollis, Director- Sales and Marketing, Skoda India, fuel pumps were the main culprit. These will be replaced with a “more robust unit that is more suitable to the varying fuel quality available in India.”

He has also confirmed that replacement fuel pumps have been distributed to dealers. An official communication regarding what would probably be an official recall is expected soon.

Thanks to BHPian maverickNerd for sharing this information with other enthusiasts!