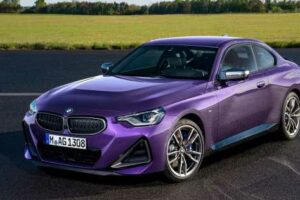 The new 2-series has escaped BMW‘s obsession with gigantic kidney grilles. As we’d been expecting thanks to some 2-series images that leaked well over a year ago, the new G42-designated coupe has a more modestly designed front end, but overall, it’s quite a fussy thing compared to the outgoing F22 2er.

Unlike the 2-series Gran Coupe, it hasn’t been lumbered with the front-wheel drive ‘UKL’ BMW uses for the 1-series and the various Mini models. Instead, the G42 sits on a downsized version of the ‘CLAR’ (Cluster Architecture) system the company builds pretty much everything else from.

It’s comfortably smaller than the current 4-series, but a fair bit bigger than the old 2-series. It’s 105mm longer and 64mm wider than the old one, making it a touch larger than an E46 M3. The track widths have been bumped up for all models, with the range-topping M240i xDrive getting the biggest increases at 63mm for the front and 35mm for the rear.

We were given most of the key stats for the M240i a few weeks ago. It’s powered by a 3.0-litre ‘B58’ inline-six turbo engine producing 369bhp and exclusively hooked up to an all-wheel drive system making for a brisk 4.3sec 0-62mph time. We’re still keeping our fingers crossed for a rear-drive version emerging at some point, but the xDrive M240i is at least tuned to be nicely rear-biased. Most of the time, the front wheels remain unpowered.

The line-up will be a simple one from launch, with only two other derivatives sitting under the M240i. There’s the 182bhp, 221lb ft 220i with an inline-four petrol engine and a 188bhp, 295lb ft 220d using an inline-four mild hybrid diesel. Both of these rear-drive versions are reasonably quick, with the petrol hitting 62mph in 7.5 seconds, and the diesel doing the same in 6.9. As per the M240i, you can’t have either with a manual – they’re only available with eight-speed automatic gearboxes.

In terms of chassis, the 2-series gets a near-50:50 weight distribution, wheel bearings that are 2.7kg lighter and reduce friction by 45 per cent, and similar “lift-related” dampers to those found on the 3-series and 4-series. If you want to take things further, the M240i can be specced with adaptive suspension, while the other two have the range-topper’s beefier M Sport brakes on the options menu also.

The interior’s pretty much a copy-paste job from the 3er and 4er, which isn’t necessarily a bad thing. In there you’ll find a 12.3-inch digital instrument cluster and a 10.25-inch touchscreen infotainment system. The latter can still be controlled via the usual very good iDrive dial on the centre console.