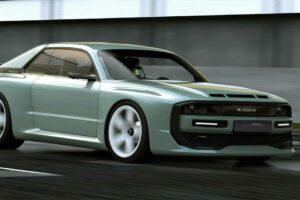 Audi’s Quattro badge currently graces every vehicle which features the automaker’s all-wheel-drive system, but Audi earned its reputation for AWD excellence with the legendary Quattro rally car, which dominated Group B rallying in the 1980s, and its roadgoing homologation counterpart. Audi has teased revivals of the original Quattro a couple of times—first with the chiseled 2010 Quattro concept and later with the plug-in-hybrid 2013 Sport Quattro concept. Now that classic car is finally making a return, but not as an Audi; instead, German EV startup E-Legend is building a limited-production electric homage called the EL1.

According to E-Legend, the EL1 weighs 3704 pounds, on the lighter side of things when it comes to EVs—for instance, the Audi e-tron weighs nearly 6000 pounds. The EL1’s looks are unashamedly inspired by the Quattro, with a squared-off front end, chunky wheel arches, a compact wheelbase, and a nearly identical roofline. The car will be constructed around a lightweight carbon-fiber monocoque and a 90.0-kWh battery, which the company claims will provide 249 miles of range according to the European WLTP methodology. Although no specifics on the electric motors were provided, the EL1’s 805 horsepower will be sent to both the front and rear axles. E-Legend says that this is enough oomph for the EL1 to zip to 62 mph in 2.8 seconds, to 124 hp in less than 10 seconds, and on to a top speed of 158 mph.

The EL1 will be hand built and will cost the equivalent of more than $1.3 million for the Europe market, where it will be road legal. Just 30 units are planned, and E-Legend is aiming for a functioning prototype to be running by early 2022. The company is also apparently devising an EL2 and EL3, although we don’t know what shape these might take, or what icons they might draw inspiration from.