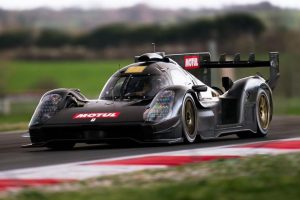 Scuderia Cameron Glickenhaus is putting the finishing touches to its V8-powered 007S Le Mans Hypercar before its 2021 race debut in World Endurance Championship. It is not hanging about on the commercial side either, announcing via social media its intention to make the incoming car fully road legal and available to buyers at $2.3m a pop. The customer model would apparently get a three-seat configuration, with the centre-seated driver flanked by two rear passengers. Just 24 examples would be built, with deliveries likely to begin two years after all cars are accounted for. And, SCG will no doubt be hoping, after the 007S has demonstrated its talents by collecting silverware at Le Mans.

The racer, which was first shown in renderings last year, has been testing at Italy’s flowing Vallelunga circuit ahead of the incoming season, which will take in the 6 Hours of Spa on 1 May ahead of the 24 Hours of Le Mans back to 21-22 August. SCG’s machine, run by factory squad Glickenhaus Racing and supported by Le Mans winning team Joest Racing, uses a 3.5-litre twin-turbocharged V8, developed by French racing specialist Pipo Moteurs. The 007S’s aerodynamic profile has been predictably ‘modernised’ from the curvaceous rendering we saw last year. It looks more typically 21st century prototype, much like Toyota’s rivalling GR010 Hybrid.

If you’re wondering why SCG’s machine doesn’t employ an electrification system like the Toyota, it’s because the latest Hypercar class rules allow for both hybrid and non-hybrid entries. In this opening year, LMP1 cars will also be allowed to compete and next year, the regulations will open up to allow cars from IMSA's new LMDh class, as well. With cars from Peugeot and also eventually Ferrari in the field, the top category is set to be more varied than ever, but, of course, the ever-controversial Balance of Performance rules will be used to even out the field. On that note, the 007S is said to develop 1,400hp, more than 400hp over the class maximum. That said, thanks to the Hypercar class’s relatively relaxed technical rules, SCG’s machine is apparently set to become fully road legal, assuming the firm overcomes the 'complex' technical hurdles.

SCG boss, Jim Glickenhaus, highlighted the car’s road-going abilities on social media, suggesting that it’ll be “able to drive up to the track, do 100 laps and drive home". He added that upon arrival at a circuit, a driver would only have to “use onboard air jacks” to lift the car and fit track wheels and tyres, before lowering the car to its race ride height and switching the ABS and traction control to their track settings. Once that’s done, the car – which SCG says weighs 1,270kg – will essentially be in the same as Glickenhaus Racing’s Hypercar entrants, which are set to be driven by racing stars including Ryan Briscoe, Romain Dumas and Richard Westbrook.

“For 50 years we have driven race cars like our Lola T70, our Ford MK-IV, our Ferrari P/3, 412P and 159S, hundreds of thousand of miles on public roads,” Glickenhaus noted. “To road register our 1967 Ford MK-IV was simple. All we needed were seatbelts and treaded tyres. Today it's a much more complex task and involves crash testing, emission compliance, massive engineering, and a lot of money…[The] Glickenhaus 007S [will be] fully US road legal.”

Glickenhaus added that the 007S could “probably” be UK Single Vehicle Approval worthy, as well as certified for use by German (and therefore EU), Japanese and even Middle Eastern regulators. The mention of those markets emphasises that the 007S isn’t intended to be a niche product only eligible for one region but rather a global car. No doubt that’s motivated by Glickenhaus’s ambition to emulate the original Ford GT, the last American car to secure an overall win at Le Mans. Glickenhaus told PH in 2019 of a “dream” to have a car drive to Le Mans, do the race, and then “drive to Paris for dinner,” still wearing the bugs and oil smudges of a daylong motor race. The 007S might be as close as that laudable dream comes to production reality.