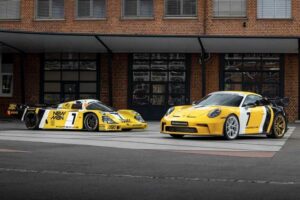 One-off cars are not a new thing. Back when cars were sold as chassis and bodies hand-beaten into shape, no two cars were ever quite the same. But the desire for individualisation has certainly taken off in recent years, presumably as even more supercars are out there to buy – and you have to stand out in the crowd somehow.

Porsche has always had its finger on the pulse with its Exclusive Manufaktur range of options, but now is going one better by resurrecting the Sonderwunsch programme first seen in the late 1970s. The premise is simple – “cars… co-created by the customer and professionally produced by Porsche” – the possibilities presumably endless. As the first Sonderwunsch build of the 21st century shows…

Paolo Barilla may not be a household racing driver name, but did win Le Mans back in 1985 with his privately entered Porsche 956. So no mere powerfully built company director playing at gentleman racer. With Barilla Group still going well, the Deputy Chairman position clearly paying handsomely and his 60th birthday looming, Paolo has commissioned a new 911 GT3 that pays homage to his 1985 racer. Which does rather put the pressure on gifts from everybody else.

Painted Summer Yellow, white and black, the GT3 faithfully replicates the stunning 956. Suggesting the wheel design is also inspired by the Group C car might be stretching it a bit, although mixing the colours certainly ensures an impact. Same goes for the rear spoiler side plates “also influenced by the design and geometry of their historic predecessor”, even if it is modified from standard. Additional unique touches include ‘PB 60’ badges, ‘Le Mans 1985’ accents for headrests and sills plus a gorgeous new PDK selector that really does look straight from a racecar. The key colour scheme matches that of the car, of course.

“In the Eighties, I had the chance to drive the wonderful Porsche 956, an iconic car in terms of performance and beauty,” said Barilla. “The interpretation of some elements in a modern GT3 makes that memory exciting and vital – for me and for people who are close to me.” Apparently he visited three times during the build to check on progress, including once with a 1:43 scale model of the 956 to ensure the utmost accuracy.

According to Philipp Setter, Head of Sonderwunsch Customer Consultation, there were many occasions when the team “had good reason to say ‘It’s not going to work’ or ‘It’s too complicated'”. But, evidently, they persevered, and the results are nothing if not attention grabbing. Cost? Not revealed, unsurprisingly. Given this GT3 features equipment not seen on any other Porsche, with all the additional effort those extras will have meant, this will have been a very, very expensive commission. Don’t be surprised, however, if a few more emerge from the Sonderwunsch workshops soon – why have a plain old GT3 when you could have a bespoke one?